Mulberries are often written off as a scrub tree, growing along and in fence lines, out of the side of other trees, and often too close to house foundations. They get in these unlikely and unwanted places because birds feast on the fruit in June and July when it’s ripe, spreading it’s seed wherever they stop to rest in a food coma. While these delightful trees can be seen as a nuisance, they are edible landscaping that would be better suited to a standalone tree — if you don’t live in the southwest of the United States where they might be banned.

El Paso, Texas banned this tree, not because of the fruit-laddened bird droppings, but because they are pollen offenders in their eyes from 1992 to 2007 . Most wouldn’t even notice that mulberry trees released pollen from February to April, peaking in March . However, if you’re sensitive to pollens you might notice if there are an abundance of male trees releasing pollen and not enough female trees absorbing it. 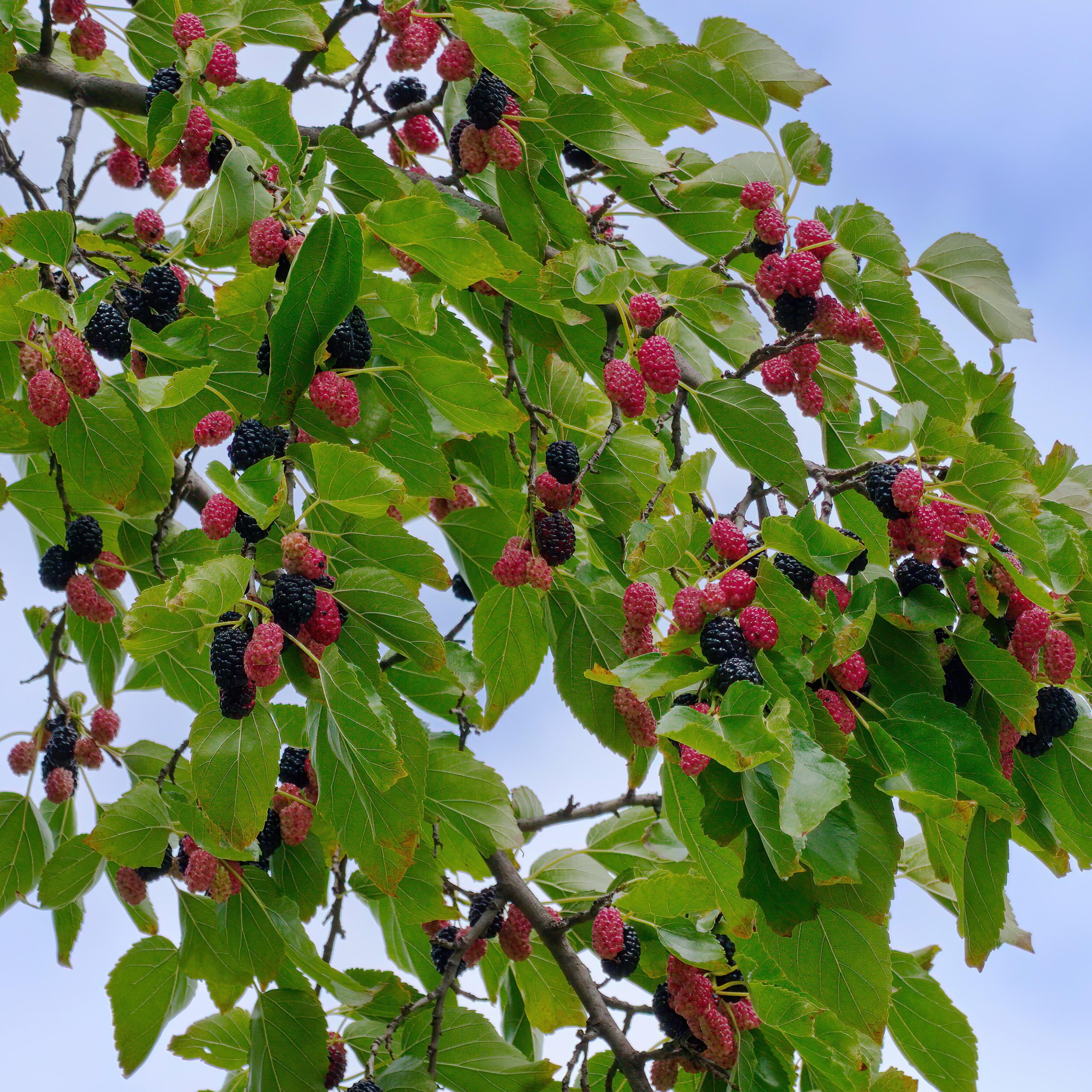 However, despite these rocky associations in the modern southwest United States full of allergy sufferers, the red mulberry which is native to the United States was eaten by the Muskogee, Iroquois , Cherokee, and Timucua by snacking on them, using them in sauces, or adding them to various delicious dishes as noted in an expedition journal by De Soto in the mid 1500s .

White mulberries were introduced into the United States from it’s native China in the 1800s as a host plant for silkworms, but the production of silk was too costly of a business pursuit so the plants were kept, but the silk was abandoned . While the white mulberry is listed as a woody invasive around the Great Lakes, it’s a cultural icon and foundation of history and industry in China. It is said that the earliest example of silk fabric that has been discovered dates from 3,630 BC in Henan. Silk cloth manufacture was well advanced during the Shang Dynasty (1600-1046 BC) era (editor’s note: still verifying this date).

Sure, mulberries have vitamins and minerals like every other fruit in the world. However, the fun part of mulberries are all the bioflavanoids found within.

Mulberries are rich in the flavanoid anthocyanin, like red cabbage and blueberries, which is one of the chemicals giving the berry their dark reddish purple hue . This flavanoid is behind a lot of health benefits. This flavanioid helps protect the heart and has shown to inhibit cholesterol in rabbits .

A few studies have indicated that some of the flavanoids are extracted in water, and this mulberry extract can help improve the ratio between LDL (bad) and HDL (good) cholesterol while also increasing the health of the liver by reducing the formation of fat on the liver ─ and elsewhere in the body ─ while helping one lose weight.

Let’s not get ahead of ourselves here: We all know that there is no magic weight loss supplement. Regardless of desire, mulberry juice is a great way to flavour your summer drinks!

Mulberry water extract is very easy to make. Simply gather fresh mulberries and soak in a water for a few days up to a week in the fridge. Remove the mulberries, and reserve the now flavoured water. Use the mulberries for something else, such as a cake or jam. You can use this extract to flavour drinks or even use in a soda stream.

We all know that antioxidants have a plethora of benefits for the body in general, from reducing inflammation to helping protect against cancer.  Mulberries are abundant in the antioxidant rutin. Recent studies have shown that this anitoxidant may play a role in both protecting against chronic conditions like diabetes and heart disease , but also aid in drug delivery, reducing the amount of pharmacological doses needed for impact . There are not enough in depth studies on the mechanisms to really understand the hows and whys, let alone how much of an impact a diet heavy in mulberries could impact one’s health.

It looks like the only negatives of mulberries is that a small percentage of the population might be offended by the pollen and that they have a slightly tart taste. Other than that, they are a wonderful fruit that is prolific across areas where birds stop after a meal. And a mulberry tree would be a great addition to one’s landscape in order to feed oneself and the wildlife.

Bradford Pear: A Lesson in Toying with Invasive Species