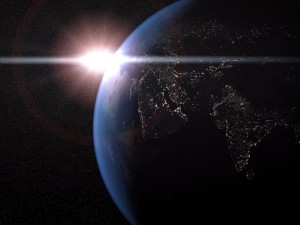 Just when you thought we had made contact with aliens, an astronomer tells us we’re incorrect.

AstronomerÂ Antonio Paris has stated that a pair of comets may be responsible for the “Wow!” signal, which made headlines back in August 1977, according to Science Alert. But let’s back up for a moment and take a look at what the “Wow!” signal really is.

On August 15, 1977, American Astronomer Jerry Ehman detected a cosmic radio signal that was so strong that itÂ hadÂ to be aliens (of course). Today, the event is known as the “Wow!” signal because Ehman scribbled the word in red next to his findings on paper.

Initially, Ehman made his findings with the Big Ear telescope, which was only able to catch 72 seconds of the signal before losing it. Two different frequencies have been proposed for the signal — 1,420.356 MHz and 1,420.4556 MHz. These correspond to the hydrogen line, which is defined as 1,420 MHz. Those who believe in extraterrestrials have long considered this area as a reasonableÂ place to look for signs of aliens.

At the time, Ehman and his team determined that the signal likely came from an area near Messier 55 and the Chi Sagittarii star group, which is the largest constellation in the Southern Hemisphere. Since 1977, there has not been a similar signal recorded.

Now, Paris is out to dispute the findings altogether.

The astronomer from St. Petersburg College believes that the entire thing was likely the result of vast clouds of hydrogen gas released by a pair of comets that shot by the Big Ear telescope. In an effort to further prove his theory, Paris is going to look at the same region of space when the comets are due back in January 2017 and January 2018. The hydrogen signal he records should be able to prove (or disprove) his theory.

So should we all ditch our belief in aliens until then?

“Proof” of extraterrestrials makes the news every day, meaning we should at least keep our eyes and ears open to the possibility. On Jan. 20, for example, astronomers noted that they have observed odd dimming patterns on a star namedÂ KIC 8462852. Could it be a space craft passing by and blocking out the light?

Let’s keep wondering for the sake of amusement.