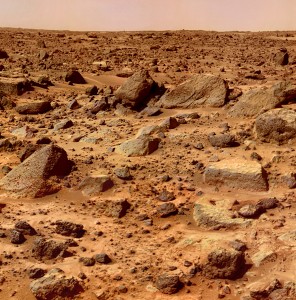 Buzz Aldrin has had plenty to say in terms of Mars exploration as of late. Back in March, he posted a photo of himself on Twitter wearing a T-shirt that read, “Get Your Ass to Mars.” If you can’t tell yet, he really,Â reallyÂ wants NASA to make the Red Planet its focus.

Now, it seems that he may get his wish.

NASA revealed a new aircraft on July 2 that could potentially be the first to take flight to Mars, according to The Economic Times. The goal would be to find potential landing areas for manned missions to Mars. The craft is shaped like a boomerang, and it’s being referred to as Prandtl-m, short forÂ Preliminary Research Aerodynamic Design to Land on Mars. It will be ready to launch by the end of the year via high altitude balloon.

The craft will be released once it reaches approximately 100,000 feet, which simulates the flight conditions of a Martian atmosphere.

“It would be able to deploy and fly in the Martian atmosphereÂ and glide down and land,” Al Bowers, NASA Armstrong chief scientist, told the news source. “The Prandtl-m could overfly some of the proposed landing sites for a future astronaut mission and send back to Earth very detailed high resolution photographic map images that could tell scientists about the suitability of those landing sites.”

So what does Buzz Aldrin think of all of this?

On his Twitter page, he hasn’t said much about the matter. However, he posted a photo of himself on July 1 wearing another Mars-supportive T-shirt.

At the moment, it seems that Aldrin is more concerned about the recent SpaceX failure. On June 28, Falcon 9 imploded within minutes of its launch at the Kennedy Space Center. It held cargo for the International Space Station.

In a piece written for Time magazine, Aldrin called for more budgetary funding for commercial space activities. SpaceX is the creation of Elon Musk, the entrepreneur behind companies including Tesla Motors.Â In an interview following the explosion, Musk told CNBC in an interview on July 8 that the incident was “definitely a setback.” However, Aldrin’s column hints that he still believes in Musk.

“SpaceXâs track record of achievement with the Falcon 9 â 18 consecutive successful flights prior to the mishap â has been notable,” wrote Aldrin. “I have every confidence that it will learn from this failure and emerge as an even more reliable launch provider.”