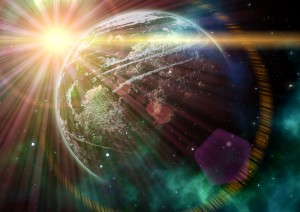 Researchers from Oxford University’s Future of Humanity Institute recently questioned whether we’re really the only ones in our universe. They examined the so-called “Fermi Paradox,” which asks why scientists have long believed in extraterrestrials, despite having zero proof. Enrico Fermi developed the theory around the 1950s when he questioned how there could be a “high probability” of extraterrestrial life when there is a lack of solid proof (O’Neill, 2018).

“We find a substantial probability of there being no other intelligent life in our observable universe, and thus that there should be little surprise when we fail to detect any signs of it,” study authors Anders Sandberg, Eric Drexler and Toby Ord, wrote in their report.

To test the theory, the researchers rounded up and analyzed studies on the seven Drake equation variables. The Drake equation, written by astrophysicist Frank Drake in 1961, suggests that there are seven variables that would affect the chances for life. Multiply them together, and the result is “N,” or the approximate number of human-like races that might exist in our universe (Mosher, 2018).

After analyzing the studies on the seven Drake equation variables, the researchers reformulated each variable as a range of uncertainty based on those studies as a whole, as opposed to an individual scientific group’s best guesses. In the end, they found that the average probability that we’re not alone in the Milky Way is about 52 percent, with a 38 percent chance that we’re alone in the entire observable universe.

“This result dissolves the Fermi paradox, and in doing so removes any need to invoke speculative mechanisms by which civilizations would inevitably fail to have observable effects upon the universe,” wrote the authors of the report. “[W]e find a substantial probability that we are alone in our galaxy, and perhaps even in our observable universe.”

So are extraterrestrials entirely out of the question?

“[T]his conclusion does not mean that we are alone (in our galaxy or observable universe), just that this is very scientifically plausible and should not surprise us,” the researchers wrote. “It is a statement about our state of knowledge, rather than a new measurement.”