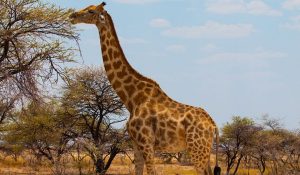 The graceful giraffe, with its trademark long legs and neck and uniquely patterned coat, is a beloved feature of the African savanna. Giraffes are one-of-a-kind…there’s nothing like them on earth. Or is there? The giraffe family tree is admittedly small, with most of its members long extinct, but the giraffe does have one living cousin, a cousin that more closely resembles their long, lost family members than today’s iconic giraffe.

Giraffes (Giraffa camelopardalis) are the tallest mammal alive today, averaging about 5.9 meters, or 19 feet, 4 inches, in heights. Although there is only one species of giraffe, there are nine subspecies, each with slightly different spot patterns. The subtle differences in the color of the spots gives biologists a clue to where they live and what they eat. The giraffe’s long nick is believed to be an evolutionary adaptation that allows the animal, a terrestrial herbivore, to browse at a higher level than competing plant eaters. It is interesting to note that, despite its long neck, giraffes have the same number of vertebrae as other mammals, seven.

As if the giraffe didn’t look strange enough, it has odd horn-like protrusions atop its head. Called ossicones, these horns are made of cartilage that ossifies and fuses to the skull as the animal ages. Both male and female giraffes have ossicones, which present as flat knobs at birth.

The giraffe’s only living relative is the okapi (Okapi johnstoni), though one would think it is akin to the zebra based on its appearance. The okapi, native to the forests of the Congo in central Africa, is shorter and more proportional than its long-legged, long-necked cousin. The okapi averages around 1.5 meters, or close to 5 feet in height, and has short chocolate brown or reddish fur covering most of its body. Its legs and hind quarters, however, feature black and white horizontal stripes that are reminiscent of a zebra. Like the giraffe, the okapi has ossicones, but only males of the species have this feature. 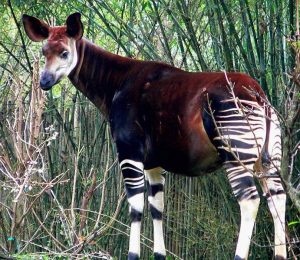 The okapi is considered a “living fossil”, meaning that it has existed in its present form for a long period of time without the significant evolutionary changes that occurred with other members of its clade, or family tree.

Researchers have uncovered fossil remains that gives a glimpse into the diversity of the giraffidae family. This family of ruminants – mammals with specialized stomachs to digest plant-based foods that also includes deer, goats, sheep, and cows – was, at one time, spread throughout Africa and Eurasia. Early members of the clade branched off from the climacoceratids, deer-like browsers. During the Miocene era, 23 to 10 million years ago, there were several early giraffe species living at approximately the same time. These included the Canthumeryx, the Palaeotragus, the Giraffokeryx, and the Samotherium. Today’s okapi most closely resembles the Samotherium., although some scientists believe it descents from the Palaeotragus. Climacoceras, the first undisputed member of the Giraffidae family, lived in what is now Kenya and had branching ossicones that looked more like antlers. The Climacoceras were most likely descendant from the Eumeryx, a deer-like mammal that lived approximately 30 million years ago. The direct ancestor of today’s giraffe was probably Giraffa jumae, which roamed from sub-Saharan Africa, through the Middle East and into Asia Minor. This animal was thought to look a lot like modern giraffes but were only about 1 meter tall. The Giraffa jumae died out about one million years ago during the Cenozic era.

All but two members of the giraffe family have gone extinct, but, sadly, both the modern day giraffe and its cousin, the okapi, and in danger of dying out as well. Habitat destruction, poaching, and disease have led to reductions in giraffes and okapis in the wild. It is estimated that only about 80,000 giraffes remain in the savannas of Africa, and between 10,000 and 35,000 okapis roam the forests of the Congo region. Conservation efforts are underway to save these cousins, and keep their branch of the mammalian family tree from extinction. Because human activity is directly responsible for the decline in giraffe and okapi numbers, it is the task of man to reverse the process and take steps to save these majestic beasts. Once they are gone, there will truly be nothing like them on earth.