Drive down a country road in the fall in most parts of the United States, and you will surely see, from time to time, some large, round, greenish-yellow, knobby balls lying on the side of the road. They are called Osage oranges, but don’t expect to squeeze them into tangy, citrus-y juice – they aren’t like the oranges you are used to. You won’t want to eat this fruit. In fact, nothing likes to eat the fruit of the Osage orange tree. But don’t judge a tree by its fruit! The Osage orange tree has much more to offer. It was a favorite tree of American homesteaders who appreciated its many qualities.

The Osage orange (Maclura pomifera) is the only remaining member of the Maclura genus of trees. It is, however, a member of the Moraceae family, of which there are living relatives. The fig and the mulberry are both Moraceae trees. Osage orange trees are small to medium sized trees, typically reaching about thirty to forty feet in height. The tree is dioecious, meaning an individual tree is either male or female and only the female trees bear fruit. A notable feature of the Osage orange is the sharp, half-inch long thorns or spikes that grow threateningly from the branches. 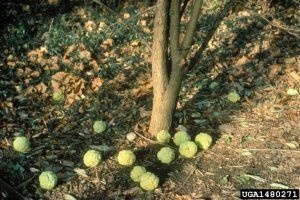 The native range of Osage oranges is rather small. It grew naturally in the area where eastern Texas meets southeastern Oklahoma and southwestern Arkansas, well suited to extreme heats, high winds, and inferior soil. Perhaps one reason why the tree’s natural range stayed small is because its fruit. It is unpalatable so animals do not disperse the seeds by eating the fruit. The fruit is also large, about the size of a softball, so it is too heavy to be carried by the wind.

The tree would have stayed confined to its small geographic area had it not been for European settlers who learned of the virtues of the Osage orange from the Osage Native Americans for whom the tree is named.

The Osage orange wood is also resistant to insect damage and rot, making it ideal for fence posts or base logs of cabins or any use that puts the wood in extended contact with the ground. Once the wood is dried, no insect wants to attack it. Because wood was the building material of choice for homesteaders, finding such a durable, rot resistant timber was an asset to settlers. The wood of the Osage orange has the highest BTU of any native North American hardwood. The density of the wood, the low moisture count, and the high BTU means that this wood is the most efficient fire wood for heating a home. Prior to the widespread use of coal as a heating fuel, frontier settlers relied on wood to keep their fireplaces stoked and their homes warm during the long, cold winters. 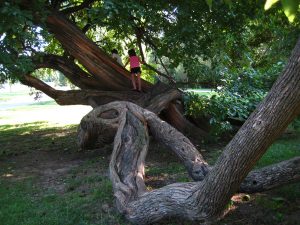 Although there is no scientific reasoning for it to be true, folklore and anecdotal evidence claim that the fruit of the Osage orange deters pests in the home. A few Osage oranges in a cellar or pantry are supposed to keep ants, mice, crickets, cockroaches, and boxelder bugs at bay. Scientific researchers have extracted chemicals from the Osage orange that could be effective for pest control, but these components exist in such low quantities that they cannot work as effectively as the stories suggest.

The final benefit of the Osage orange tree is the one that is responsible for its widespread planting all across the west and Midwest. When planted close together, the trees, with their menacing spiked branches, form an impenetrable wall that keeps livestock in place. The tree transplants easily, grows quickly, and adapts well to most growing conditions, so farmers and ranchers all across the South, the Plains States, the Midwest, and the West planted Osage orange trees as a living fence. Many of these stands of Osage oranges still remain today. In fact, this is probably the reason for the rows of trees you find along back country roads and why they are often called “hedge apples”.

When barbed wire fencing became popular as an efficient and cost-effective cattle fence in the late 1800s, farmers and ranchers no longer had to rely on the Osage orange to keep their livestock contained. In a final nod to the usefulness of the tree, most homesteaders crafted fence posts out of their Osage orange fence row trees, knowing that the wooden posts made from Osage orange wood would stand the test of time.