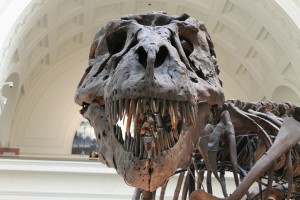 We may frown upon the Donner Party for their reaction to extreme hunger, but as new research shows, the Tyrannosaurus Rex might have been more than comfortable with eating its own kind.

This isn’t the first time that scientists have suspected cannibalism among T-Rexes. In 2010, Paleontologist Nicholas Longrich also found bones that indicated a scuffle between the dinosaurs. Earlier this year, David Hone of the University of London found a T-Rex skull that had several bite marks. The puncture wounds indicate that a T-Rex chomped down on a fellow dinosaur, and it was continuously bitten after it died.

Animals and Cannibalism
We might get a little squirmy at the thought of humans eating other humans, but let’s back up for a moment and take a look at how the animal kingdom handles cannibalism. Typically, it’s “survival of the fittest” out there, which means there isn’t much time for squirming. Here are some examples of cannibalism in the wild:

Of course, this doesn’t mean that you should go all Hannibal Lecter on your friends and family. However, cannibalism may actually be a natural occurrence — at least in the wild. Perhaps this will make it a less cringe-worthy topic of discussion, even when it’s about the T-Rex.