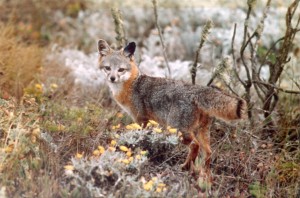 The foxes of California’s Channel Islands may have just set a new record.

Once on the verge of extinction, these animals have now staged a huge comeback, according to the U.S. Fish and Wildlife Service. In fact, the government group believes that it may be the fastest comeback in history.

In March 2004, four of the six subspecies of the island fox (urocyon littoralis)Â were listed as endangered. Now, a final recovery plan has been launched for the four subspecies, and the U.S. Fish and Wildlife Service is initiating status reviews as well.

âDue to the remarkable success of the Endangered Species Act, recovery actions by land managers and conservation partners have led to dramatic population increases on all four islands since listing, effectively bringing the species back from the brink of extinction,â said Steve Henry, field supervisor of the Serviceâs Ventura Fish and Wildlife Office. âTo date, it appears that this is the fastest population rebound due to recovery actions and ESA protections for any land mammal in the United States.â

The release of a final recovery plan is one of the first signs of a movement toward removal from the Federally Threatened and Endangered Species list. A captive breeding program, held between 1999 and 2008, was largely credited with the boom in population.

Making Way for a Brighter Future

Of course, the U.S. Fish and Wildlife Service plays a large role in the survival of species on the brink of extinction, but that doesn’t mean you can’t help. There are plenty of ways that you can do your part to preserve the land and animals in your area.

VolunteeringÂ at your local national park or wildlife refuge can help you learn about the habitats of wild animals, as well as endangered species in your region. Being mindful of your own property can be beneficial to the environment, too. Think about the habitatsÂ of nearbyÂ animals before you decide to make alterations to your property.

In January 2013, the U.S. Fish and Wildlife Service estimated that 2,054 species were endangered around the world. A total of 1,436 of them were located in the U.S.

This problem is closer to home than most people think. Channel Islands’ foxes are a prime example of how extinction isn’t the only option for these creatures.