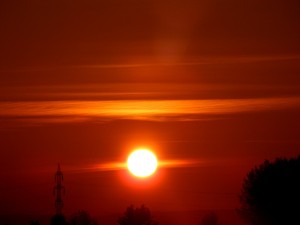 Next time your phone drops its connection, you might want to look up at the Sun.

New research shows that the Sun and its flare-ups may be more powerful than originally thought, according to OuterPlaces. A study published in the Astrophysical Journal has found that “Superflares,” which are “orders of magnitude larger than most energetic solar flares,” are typical on Sun-like stars. This type of flare can release the energy of one billion megaton bombs, effectively knocking out all of our planet’s electronics and communication systems.

“If the Sun were to produce a ‘Superflare’ it would be disastrous for life on Earth,” wrote the authors of the report, according to the news source. “Our GPS and radio communication systems could be severely disrupted and there could be large scale power blackouts as a result of strong electrical currents being induced in power grids.”

Luckily, the researchers do not believe that a stellar “Superflare” with this type of power will be produced any time soon. However, it’s always worth acknowledging how much power the universe has over our wee little planet.

What is a Solar Flare, Anyway?

You may have already heard of the potential of a solar flare to minimally disrupt our electronics here on Earth, but what exactly is a flare? In short, it occurs when magnetic energy that has built up in the atmosphere suddenly releases, according to The Telegraph. Think of it as a small explosion or eruption.

Solar flares can impact Earth because they create X-rays and ultraviolet radiation, which creates small radiation storms in the planet’s ionosphere. This can lead to blackouts or interruptions in electronic connectivity.

Fortunately, it is possible to forecast some sun flares. For instance, it’s known that magnetically complex regions of the sun are responsible for producing most flares. By keeping an eye on these areas, scientists can predict a flare within 24-to-48 hours before it occurs (The U.S. National Oceanic and Atmospheric Administration has the responsibility of forecasting sun flares).

For the most part, common sun flares are small. The large ones — also known as the ones we should be most worried about — are relatively infrequent. Solar activity is based on an 11-year cycle, and the odds of a big flare occurring takes place during the peak.

The bottom line is you don’t need to worry about a solar flare interrupting your day on a regular basis. That being said, don’t underestimate the power of that great big bright ball in the sky.

Sources
Pugh, C.E. “A Multi-Period Oscillation in a Stellar Superflare.” The Astrophysical Journal. October 23, 2015.
“Solar flares: everything you need to know.” The Telegraph. February 22, 2012.
Tracey, Janey. “The Sun Could Release ‘Superflares’ with the Power of a Billion Megaton Bombs.” Outer Places. December 3, 2015.