Fortunately for us, many medieval-era documents, books, and manuscripts have survived the ten or twelve centuries since the Middle Ages. Not only do these artifacts provide scholars and historians with vital information about life, laws, culture, and society of the Middle Ages, but they provide scientists and chemists with tangible evidence to tell us how medieval scribes mixed their different colored inks using materials they found in nature. Some of these colored inks were quite effective. Although some of the color has faded over time, many of the ink on ancient documents are just a brilliant as the when they were penned long, long ago. Just how were these medieval inks made and what items were used to mix these pigments?

Black is the ink color most commonly found on medieval manuscripts. Early in the Middle Ages, the black ink was made from the carbon that was produced by burning wood. The carbon was scraped off and mixes with a paste made of tree gum and water. As the medieval era progressed, scribes altered their recipe for black ink.

Beginning in the fifth century, scribes used a product called iron gall ink. This was a black ink with tinges of purple that was made from oak tree gall, the odd, round, baseball-sized growths on oak trees. These tree galls are filled with the larva of the gall wasp. The ink was made by combining the gallotannic acid from the oak tree gall with iron sulfate and some sort of binding agent like tree resin or gum. The iron gall ink looks gray in color when the scribe wrote with it, but it dried to a much darker color, the purple-black, when the iron particles oxidized. What made the iron gall ink so permanent was that it permeated the fibers of the parchment, making it impossible to blot out or erase, and it was not water-soluble so it couldn’t be washed off.

In medieval manuscripts, we see several shades of red, indicating that different processes and components went into making the inks. Most commonly, the red ink from the medieval era was made from cinnabar, a natural, yet toxic, chemical compound of mercury sulfide, or HgS. Vermilion was also used in pigment. Like cinnabar, vermilion is a chemical compound of mercury and sulfur. When the compound is heated and the steam is trapped, the vapors solidify into poisonous deposits that harden. The deposits are collected, then pulverized to make ink and paints.

A safer way to produce red ink was to use the pigments found in certain plants. The root of the Madder plant, a common plant found throughout Italy, contains an acid called ruberthyrin that is red in color. By grinding up the root and mixing it with sulfuric acid, red ink, paint, and dye are made. Brazilwood, a tree native to South America, was discovered by Portuguese explorers and brought back to Europe where prized for its dense, reddish wood. The wood contains a substance known as brazilin that, when it oxidizes, becomes a dye called brazilein. The wood of the tree was cut, dried, and ground into a power to make dyes and inks. 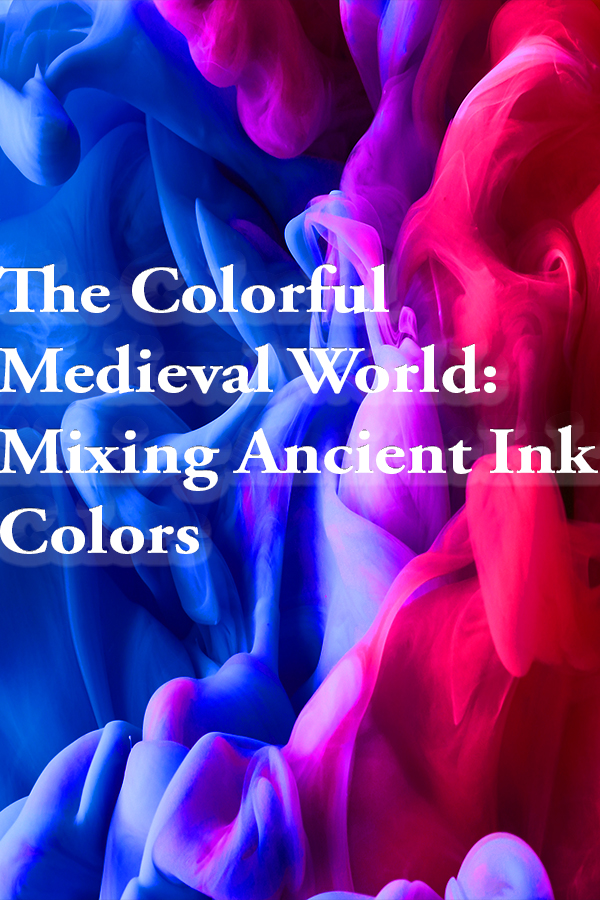 Lapis, or Lapis lazuli, is a semi-precious metamorphic rock that has been mined in what is now Pakistan and Afghanistan since antiquity. The strange, vibrant-blue color of the stone made it valuable. During the medieval era, lapis was traded to Europe. There, the rock was pulverized to make the most expensive ink and paints of the time. Called aquamarine, this pigment was so expensive and fine that most artists reserved it for special art subjects. It was often used to color the clothing of the Virgin Mary in artwork included in important manuscripts of the era.

Blue is a common color in medieval documents, however. Researchers have determined that, although the aquamarine pigment made from lapis was a favorite color, its high cost made it difficult to come by. Therefore, medieval scribes found other ways to make blue ink for their manuscripts. Azurite, like lapis, is a stone, but unlike lapis, azurite is found throughout Europe and relatively easy to mine. High in copper, azurite is a dense stone. A worker had to spend long hours and exert a lot of muscle grinding the azurite into a fine powder which could then be mixed with a gum or oil to make blue ink.

Yet another blue-colored ink–this one more of a purplish blue–was produced by forming a thin liquid from the seeds of the Crozophora, or tumsole plant.

In the Middle Ages, green pigment was obtained by using verdigris, the natural green patina that develops on brass, copper, and bronze. Acetic acid on the copper reacts with sea water to form a bright green deposit that can be scraped off the copper and made into ink or paint. As an oil paint, verdigris held its color fairly well, but as an ink, it has a low lightfastness. Exposure to light and air turns the green ink to a brown color over time. That’s why many medieval manuscripts appear to have brown grass and leaves.

Hues for yellow ink could be made from ochre, but those were mostly muted shade of yellow. A bright, vibrant yellow color was made using saffron, an expensive spice made from the saffron crocus flower. The carotene in the flower results in a substance called crocin, which was used in the textile industry, and for paints and pigments. But saffron was a costly spice so other sources of yellow pigment were utilized.

Yellow pigment was also found in a sulfide and arsenic substance called orpiment that has a chemical compound of As2S. Orpiment is a deep-yellow substance found in hydrothermal vents and volcanic fumaroles. Like the cinnabar, it is a toxic material that could be hazardous. Its brilliant yellow color, however, made it popular for dyes and inks. Orpiment was crushed into a fine powered and mixed with oils or resins.

Medieval scribes went to great lengths to produce documents and manuscripts that were both informative and artistic. Nearly every book or tome from the Middle Ages includes colorful drawings and illustrations. The ingenuity of artists and scribes of the era are responsible for the vibrant inks that are still on the pages today.

What Is Your Color Made Of? An Exploration of Chromatography