We equate marsupials, mammals with pouches for carrying their young, with the land Down Under. Kangaroos, wallabies, wombats, bandicoots, Tasmanian devils, and koalas are all practically national symbols of Australia. One species of marsupial, however, has never seen the Sydney Harbor Opera House, Uluru, or the Outback. It is the opossum, the only marsupial found in North America. It begs the question, how did this marsupial travel so far from its family? It may surprise us to learn that the opossum didn’t wander; the other members of the marsupial family did.

Before we take a trip through several million years of history, let us first review what it is that makes marsupials unique among mammals. Marsupials give birth to underdeveloped offspring and the mother then carries her young in a pouch until it is older and more self-sufficient. Approximately seventy percent of all marsupials are found on the Australian continent, which consists of the Australian mainland, New Guinea, Tasmania, and surrounding islands. This represents about 334 species. The remaining thirty percent of marsupials make their home in the Western Hemisphere. While the majority is found in South American, there are 13 marsupial species native to Central America, and just one, the opossum, in North America. 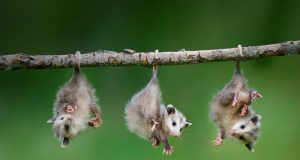 Opossums are the only non-primate animal with opposable thumbs. They also possess long, thin tails that comes in handy for added support when they hang upside down on tree limbs from their rear feet. Even after their young emerge from the pouch, the youngsters may hitch a ride on the mother’s back.

Understanding how the opossum makes its home so far away from its fellow marsupials is only possible with an understanding of continental drift and the theory of Pangea. All of Earth’s land masses were once part of a mega-continent, Pangea, according to the theory. Then, by the end of the Cretaceous Period, the land mass had split into seven large pieces that closely resemble today’s continents.

Fossil evidence in North America shows that a family of marsupials known as peradectids, an ancestor to today’s marsupial family, was prevalent throughout the area. One such piece of evidence is a 55-million year old skull of a marsupial that was found imbedded in limestone in Wyoming. Further evidence and conclusions put forth from scientists indicate that marsupials migrated from North America to Central and South America and on to Australia before Pangea split apart. Once they were all on separate continents, the marsupials evolved into the diverse variety of species we see today.
Then, about 20 million years ago, North American marsupials went extinct. When the isthmus of Panama formed approximately three million years ago, North and South America were once again connected, allowing two marsupials, the Virginia opossum (Didelphis virginiana) and the southern opossum (Didelphis marsupialis) to repopulate North American. 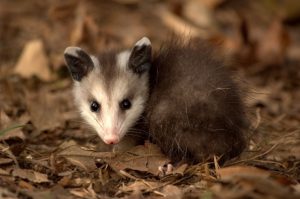 Although we think of Australia as the birth place of marsupials, this unique family of animals, in fact, hails from North America. The opossum may, at first glance, appear to be a misplaced marsupial, it actually lives right where it all started while its cousins, the kangaroo, the wallaby, and the Tasmanian devil, to name a few, are to ones who wandered far from home.