One of the most striking examples of evolutionary transition in all biology history is the evolution of modern birds. Their group of land vertebrates is the most diverse on Earth, with more than 10,000 extant species worldwide (Brusatte et al. 2015). This evolutionary transition from an animal very much alike Tyrannosaurus rex, date back to the Mesozoic Era and was well documented in the last two decades with the advent of new fossil discoveries and molecular phylogenetic analysis of living birds (Brusatte et al. 2015). These new discoveries reaffirmed that birds have indeed evolved from dinosaurs during a period of more or less 100 million years, even before the non-avian dinosaurs went extinct 66 million years ago.

Although very much credited nowadays, this concept that birds evolved from dinosaurs was once wildly debated. When the British anatomist Richard Owen found the Archaeopteryx bird fossil in Germany and dated it back to the Late Jurassic (150 million years ago), he found both avian characteristics and reptile characteristics, which was odd at the time. After decades of debate, in the 1960s-1980s a group of paleontologists were concomitantly finding many pieces of evidence on the link between dinosaurs and living birds. In 1990 most scientists were completely convinced about this link and this idea became the most accepted one, with features like the skeleton, soft tissues, growth, reproduction, and behaviour being shared by the two groups (Brusatte et al. 2014).

Inside the dinosaur family tree, birds are allocated in the theropod group, which comprises most carnivorous species – including the genera Tyrannosaurus and Allosaurus. They can be more specifically allocated to the subgroups of Coelurosauria, Maniraptora, and Paraves, being mostly related to the known Velociraptor (Norell and Makovicky 2004). Although there was some certainty about Archaeopteryx being the first and most primitive bird, now research suggests that it also could be represented by some other theropod feathered dinosaurs such as Anchiornis and Xiaotingia (Foth et al. 2014), or others dromaeosaurids or troodontids (Godefroit et al. 2013).

The Early Cretaceous (146-100 ma) was marked as the period of the major bird diversification, and by then many of the larger groups of birds were already established (Wang et al. 2015). However, the true modern birds were mostly radiated in the post-Cretaceous. In northern China, in the Jehol Biota (Zhou 2014), many fossil skeletons have provided evidence that of this diversification, which occurred probably around 130.7 and 120 million years ago. After Archaeopteryx, these are the oldest known avian fossils and they represent half of the total recorded diversity for Mesozoic avian species.

A pattern that has become clearer over the past years and which reaffirms the concept of birds evolving from dinosaurs is that many of the characteristics of living birds (such as wishbones, egg brooding and feathers) evolved first in the theropod dinosaurs, those ones that originated birds. There are some other features, however, that evolved in more recent bird groups, for example, rapid growth, a keeled sternum, pygostyle, and beak (Brusatte et al. 2015). In that case, the evolution of dinosaurs into birds was not a single, rapid event, but instead, it was a gradual process of millions and millions of years (Brusatte et al. 2014). Modern birds’ small body size, for instance, which is suited very well for flying, is actually an evolutionary trend that has evolved during at least 50 million years and began actually in a maniraptoran theropod distantly related to birds (Benson et al. 2014). Feathers are a feature that probably began in early dinosaurs, or maybe even in close relatives to dinosaurs (Xu et al. 2009). Feathers are used not only for flight but for display, thermoregulation and egg brooding. The earliest stage of feather evolution – called ‘protofeathers’ and similar to a hair-like filament – were found in many groups of theropods such as the tyrannosaurs Dilong and Yutyrannus (Norell et al. 2005).

Currently, however, the role and evolution of feathers are clearer than ever: it seems that feathers have evolved first in non-avian dinosaurs, mainly for thermoregulation and display and only later they were able to change to flight structures. But, there is also evidence that at least some of the non-avian dinosaurs did use feathered wings to fly. The earliest birds, like Archaeopteryx, did not present features for a powered flight, as modern birds do. Archaeopteryx lacked both a bony sternum and a compensatory specialized gastral basket, which can support the flight muscles. Only a long time after, in derived birds, that structures related to the modern flight-style were able to develop.

With the mass extinction faced by creatures at the end of the Cretaceous (66 million years ago), non-avian dinosaurs and many other groups were completely gone. This extinction, which was caused probably by a massive asteroid or comet, created a novel space in which new species could diversify. In the Late Cretaceous, birds were highly diverse, but there is evidence showing that many groups of early birds could have gone extinct or separated as well, along with non-avian dinosaurs (MacLeod et al. 1997). Other sources of evidence suggest that there was a period of rapid diversification and genetic evolution of birds, 15 million years after the mass extinction. 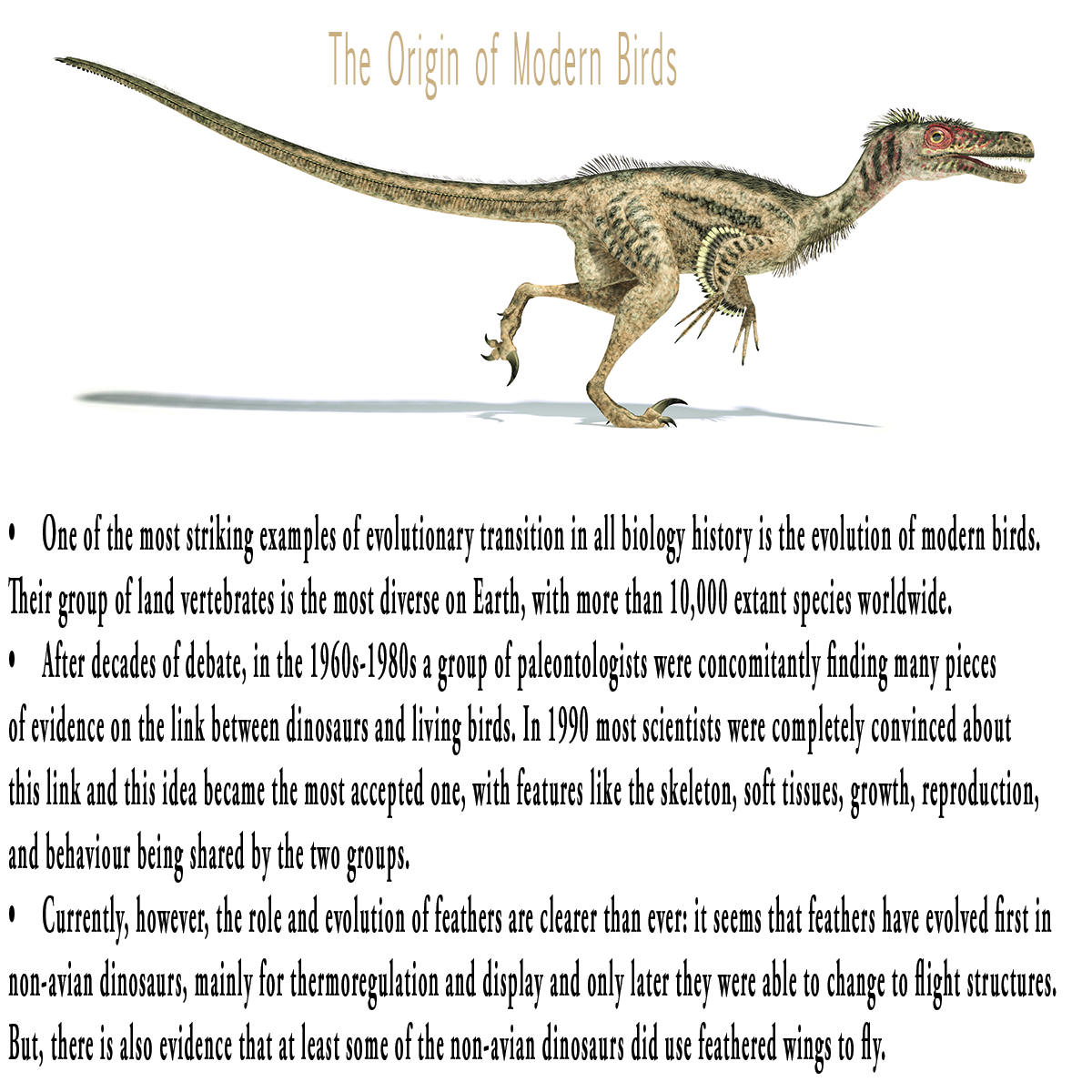