Language is probably the most important thing we have as human beings. It allows us to share ideas, feelings, thoughts, and news. We use it every day to communicate who we are, what we believe in, and express our emotions and desires. In communicating science, it has an additional dimension to it, whereas it shares a load of responsibility we rarely consider in daily life. As I’ve seen while I work with the public, there are two different, really specific ways that we lose interest: specialization and relevancy of information.

For example on specialization, this week as I happily chatted with a fellow archaeologist at my âreal worldâ job, Teavana, another of our colleagues walked up, listened for a few moments, then declared how we were speaking in tongues. Apparently, the evolution of mandibles in the human species is not a glowing sticking point for the average person.

Vocabulary of science is jargon. It goes beyond field specialization to even general science being somewhat inaccessible and far beyond relevancy. For instance, my fiancee works at a welding shop where they deal with geometry as well as small industrial machines, such as grinders. Grinders operate on the basic principles of friction, which is rather simple to grasp and understand. However, the user’s manual is not written in plain English; it’s written in university level math and physics, mixed with science jargon. However, the guys that work on the machine haven’t attended higher level university classes where these sorts of formulae are commonplace. They skip over the jargon, skimming to look for the basic information that is needed to operate and repair the machine efficiently. The information never appeared in plain English, so the manual, while full of information, was essentially useless thanks to the vocabulary it was written in. 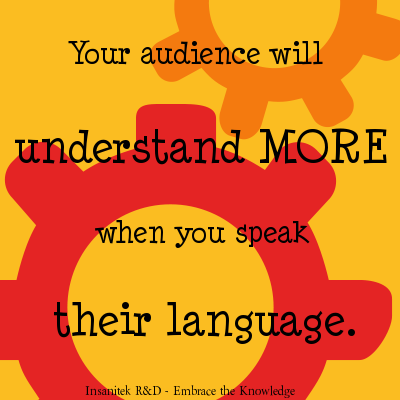 This divide between the communicator and user can be quite large, depending on where you look and how you look at it. We strive to keep the divide between teacher and student low, regardless if the student and teacher have similar interests and backgrounds or not. However, there is this presumption that the average person is so well educated that they could read physics formulae to perform their job, when in reality all they have ever known is the general principle of friction by âwhen you tighten the belts together, it gets harder to move an object throughâ.

It is my belief that science should not be off-putting, let alone confusing. It should also not be inaccessible or so boring that people choose to stay away from it. This doesn’t mean we need to dumb down science, but we need to watch how we present and explain things. In all of my outreach, I’ve found that the general principles of science are not to complex for the general public, but I have found that they don’t appreciate the concepts being explained in an inaccessible format â such as derivatives which they’ve never seen, let alone practised with. On the other hand, not many would find such specialized things such as the evolution of mandibles and occipital bones relative to their daily lives to the point of listening and retaining information.

There are some really great ways that people have developed to keep this divide between scientists and non-scientists low. Some are tried and true, others are newer. There are science cafes, outreach, teacher development workshops, museums, and of course books and libraries. Despite of this, there is much work to be done to increase the relevancy and usefulness of science to the average person, even if it’s only to get their interest in information for the mere sake of accumulated knowledge.

The vocabulary of science

The jaded public and the Freedom of Information Act