The term “ghost forest” might sound spooky at first, but it is used to describe a non-supernatural problem in the science community. Ghost forests are often viewed as examples of deforestation, courtesy of global warming. Due to rising sea levels, some coastal landscapes are being reshaped as trees are being “poisoned.”

“A ghost forest is the remnants of a live forest that are now dead — standing dead trees and stumps in the middle of a marsh,” Matt Kirwan, who researches coastal landscapes at the Virginia Institute of Marine Science (VIMS), told The Daily Press. “Where you have marsh vegetation now, you used to have trees.”

Ghost forests are not a new phenomenon, but they are now being more frequently studied along the mid-Atlantic coast as they pop up. Kirwan adds that storms that kill adult trees and insect outbreaks can speed up the development of ghost forests. However, he still believes that rising sea levels are to blame for most of them.

“The mechanism in the long-term is sea level rise,” Kirwan told the Press. 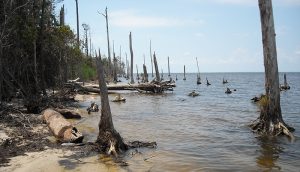 An analysis conducted by VIMS suggests that 100,000 acres of coastal forests may have died off near the edges of Chesapeake Bay as early as the 1850s. The dead forests now appear as marshland, and the former marshes are now open water. Many experts believe ghost forests could play a critical role in helping us better understand the impact of global warming.

“They could be very useful indicators of past sea level change,” Ben Horton, a Rutgers professor who studies sea level rise, told Climate Central. “How did the landscape respond to any pulses in sea level? That gives us context for what will happen in the future.”

When forests become “ghosts,” they also begin to lose the ability to absorb carbon dioxide (and fight global warming) as their trees die. In that respect, it’s a losing situation – unless humans intervene, of course. One solution would be to discover a new way to foster seedlings in fields that are currently used for farming, as the forestland disappears.

As ghost forests continue to be more closely studied, perhaps experts will shift a focus toward developing solutions along the way.