So, all over the internet people are talking about the Apple versus FBI security issues. It is all over YouTube, between every two cat videos there is a video about Apple vs. FBI now! But what’s the big deal? 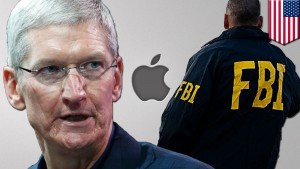 For those of you who were not following this for the last few weeks. The FBI asked Apple to create a software for them to bypass the iPhone security lock codes so they can gain access to a locked iPhone belonging to a mass shooter, a dead mass shooter, actually. Apple refused to do so. Tim Cook and Steve Wozniak were very vocal about it.

Taking this issue at face value might seem a bit taunting. Why wouldn’t Apple help the FBI gain access to this dead criminal phone? The thing is, Apple did everything they could to help. They gave the FBI access the accounts information, including the iCould backup files, but that is all what Apple could do at this point.

Yes, yes, creating a backdoor software is possible to gain access to locked iPhones. However, Apple does not have that software, they will have to create it. And it is not that simple. Technically, such software could be created. However, doing so would undermine the security features of all iPhone in existence.

The FBI insist in saying that they only want to use this software in this one isolated incident and it will not be used again. Well, that’s bullshit! Imagine this with me; Let’s say Google made a master password for all their Gmail accounts. Let’s say they created a 64 character long code if entered along any Gmail account at all will grant access to the content of that Gmail account. Imagine if such code existed. It does not exist, obviously, but imagine it did. Now imagine that you, yes you, have that code. You can access any Gmail account in existence with it. You might say that your ethic will stop you from abuse it, but that is beside the point, the existence of such code is disastrous by itself. It implies that all Gmail accounts can be hacked into without hacking required! You only need this code! And sooner or later someone will steal this code from you or manage to reproduce it.

The FBI is asking Apple to intentionally keep a security bug, a security hole, a software cancer, in their products just in case the FBI felt like accessing it for any reason they see fit. Beside, do you think if such a thing was made that the Russian, Chinese, Saudi, and other governments would not want this special code/software so they can access locked iPhones? All of them will claim they will only use it to fight terrorism. Not to mention having a security flaw by design is the most idiotic thing any IT company could do. Even if they were careful with it. You are being hacked as it is, but then you will be asking for it.

Move Over, Apple: Google Tries to Get Back Into the Health Sector