If you thought the world’s most powerful X-ray couldn’t get any more powerful, think again. Known as the Linac Coherent Light Source (LCLS) X-ray Laser, the device is set to become 8,000 times faster and 10,000 times brighter than before. This will give scientists a new opportunity to see how nature operates on an atomic level. 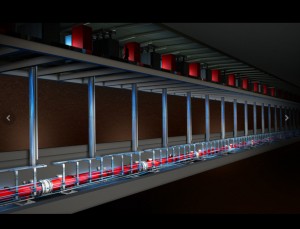 To be fair, the X-ray was never really “complete.” In fact, it is not expected to reach its full potential until 2020, which is when it will presumably fire up to 1 million X-ray pulses per second. The enhanced edition of the LCLS, known as the LCLS-II, has just begun construction. LCLS became functional just six years ago when it was created at the Department of Energy’s SLAC National Accelerator Laboratory in California.

Since it went into use, scientists have been able to look into chemical bonds and better understand how electric charges rearrange in materials. The X-ray is the first of its kind, and it has used the brightest, fastest X-ray pulses ever made for observation of the atomic world.

“LCLS-II will take X-ray science to the next level, opening the door to a whole new range of studies of the ultrafast and ultrasmall,” said LCLS Director Mike Dunne, according to Discovery News. “This will tremendously advance our ability to develop transformative technologies of the future, including novel electronics, life-saving drugs and innovative energy solutions.”

So far, scientists have seen electrons move through materials and observed the behavior of atoms in stars. The technology of the X-ray also opens up the door to explore the disease-related proteins at the atomic level, increasing the potential to discover cures.

LCLS works when electrons move down a copper pipe that operates at room temperature. It allows 120 X-ray lasers to be generated per second.

When LCLS-II is created, it will be able to conduct electricity at 456 degrees below Fahrenheit. With this capability, LCLS-II can generate laser beam pulses that are 10,000 times brighter.

“Our lab has a long tradition of building and operating premier X-ray sources that help users from around the world pursue cutting-edge research in chemistry, materials science, biology and energy research,” said SLAC Director Chi-Chang Kao. “LCLS-II will keep the U.S. at the forefront of X-ray science.”

What Makes Magnets Work? The Spinning Electrons of Magnetics

The Doomsday Clock: What Is It, and Is All Hope Really Lost?

Hands-on exploration: A simple method of teaching the public

Passing The Torch of Knowledge