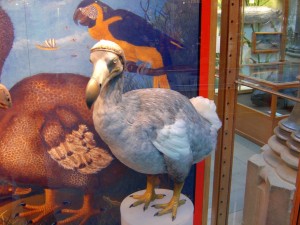 Although the long-extinct dodo bird may be at the center of many jokes, new research suggests that maybe we should all lay off a bit.

A study published in the Zoological Journal of Linnean SocietyÂ has discovered that the size of the dodo’s brain in relationship to its body is on par with its closest relative — the pigeon. In turn, this indicates that the bird may have not been as “dumb” as we thought. Additionally, the dodo had an enlarged olfactory bulb, which is the part of the brain responsible for smelling.

“It’s not impressively large or impressively small — it’s exactly the size you would predict it to be for its body size,” said Eugenia Gold, lead author, when referring to the bird’s brain. “So if you take brain size as a proxy for intelligence, dodos probably had a similar intelligence level to pigeons. Of course, there’s more to intelligence than just overall brain size, but this gives us a basic measure.”

Other than its reputation for being “dumb,” the dodo is known for being a flightless bird. It originally live on the island of Mauritius in the Indian Ocean. An introduction of invasive species caused its extinction less than 100 years after the arrival of humans.

While the dodo may not beÂ the smartest creature to have ever lived, it’s far from the “dumbest.” Let’s take a look at some other intelligent animals, according to Jon Lieff, a practicing psychiatrist with specialties in geriatric psychiatry and neuropsychiatry.

Of course, it’s worth noting that scientists often feud about what makes the list of the top smartest animals. However, Lieff’s sneak peek can give everyone a little something to think about next time they look over at a non-human creature.

Crow Funerals: Why the Murder Mobs the Dead