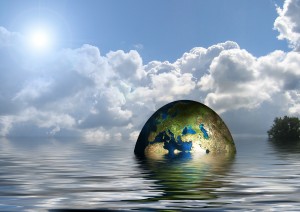 You’ve likely heard plenty about the sea levels rising over the course of your lifetime, but now, there are even more facts to back it up.

A study published in the Proceedings of the National Academy of Sciences of the United States of America has found that there is a 95 percent probability that the 20th century sea level rise was faster than any of the previous 27 centuries. Between 1900 and 2000, the rate averaged 1.4 millimeters per year. According to NASA, the current rate is 3.4 millimeters per year, showing an acceleration.

To add to the blow, scientists also think that if humans had not been around to warm the planet, there is very little chance that the sea levels would’ve rose in the 20th century. Instead of a 14 centimeter rise between 1900 and 2000, it would’ve been more like 3-to-7 centimeters.

The news is disheartening, and it may even be devastating to those who work to protect the planet and its habitats. However, new research that was released around the same time as this study might offer a glimpse of hope.

Experts now believe that global warming might be “slowing down” or even receding into a hiatus, thanks to new data from client models, according to Nature.

“There is this mismatch between what the climate models are producing and what the observations are showing,” says John Fyfe, a climate modeller at the Canadian Centre for Climate Modelling and Analysis in Victoria, British Columbia. “We can’t ignore it.”

Many people had argued that global warming was slowing down in the past, but there was little evidence to back up this claim. Now, the climate models indicate that the hiatus may actually be looming.

However, climate models are not necessarily reputable for capturing changes in global temperature over a long period of time. Gavin Schmidt, director of NASA’s Goddard Institute for Space Studies, is one who believes the argument over global warming’s ebb and flow should come to a stop. He told the news source that there is “no evidence for change in the long-term warming trend, and there are always a host of reasons why a short-term trend might diverge.” Climate change models might not capture these divergences.

And so, the door remains open for more discussion on climate change, rising sea levels, and everything in between. At least we’ll all have something to chat about at the next cocktail party.