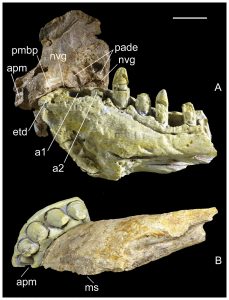 Dinosaurs were some of the most menacing creatures to ever walk the planet, but what about crocodiles? Believe it or not, there was once a fearsome crocodile-like animal that roamed the Earth and struck fear into the hearts of dinosaurs.

The Razanandrongobe sakalavae, or Razana for short, lived during the Middle Jurassic period in Madagascar. A new study published in PeerJ recently revealed details on new findings on the animal, which would be considered a terrifying beast today. (Dal Sasso, Pasini, Fleury, & Maganuco, 2017)

Razana was capable of thriving on both land and water. The species was initially documented in literature about a decade ago. However, scientists were unsure of its actual existence due to a lack of fossil evidence. Its specific classification was also unknown, up until now.

Scientists had once theorized that it was a “massive, meat-eating theropod dinosaur,” or merely another type of reptile. Now, fossils of Razana’s jaws and teeth have shed more light on how the creature once lived.

“The right premaxilla indicates that the rostrum was deep, wide, and not pointed,” the authors wrote in their report, describing the discovered fossils. “It bears five teeth that are sub-vertical and just slightly curved lingually; the mesial teeth are U-shaped in cross-section and have serrated carinae on the lingual side.”

In short, the Razana’s teeth would have been just as terrifying as those found in any carnivorous dinosaur at the time. But it isn’t just its massive jaw that would’ve been threatening – its sheer body was also intimidating.

Razana was likely larger than any other known notosuchian – notosuchians are relatives of today’s crocodilians. Based on the newly discovered fossils, it seems that Razana was as large as a pickup truck. Its teeth were the size of bananas, and they were strong enough to break down preys’ “fleshy bits.” (Buehler, n.d.)

Unlike today’s crocodiles, Razana’s legs were also positioned straight and erect under its body. This gave it a more “athletic, uncrocodile-like” posture, closer to the Velociraptor.

Razana is one of many fearsome predators that once lived on Madagascar. Abelisaurs and razor-toothed ceratosaurs were also known to have resided on the island, making it perhaps one of the most dangerous places to visit during the Jurassic period. Maybe we should be more grateful that we came after the dinosaurs.