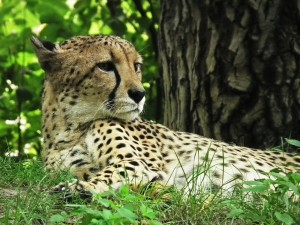 What are drones good for if not landing on the White House lawn?

Scientists say that animal tracking may be a good reason to use them, according to TreeHugger.com. Researchers from Australian National University have proposed using drones to tag and track wildlife. Although it seems like a small initiative, doing so would save researchers an ample amount of time. Instead of tracking animals down in the wilderness, they would spend more time researching their moves in the lab.

“Early indications are that the drones could save a huge amount of time,”ANU Associate Professor Adrian Manning, told the news source. “If you have two operators working and they can put the drone up in two bursts of 20 minutes, they can do what would take half a day or more to do using ground methods.”

The ANU researchers have created the world’s first radio-tracking drone, which can identify animals and map their locations on a laptop. In testing, the drone has been able to find radio tags as small as one gram. This means that following animals as small as migratory birds would be no problem.

“The small aerial robot will allow researchers to more rapidly and accurately find tagged wildlife, gain insights into movements of some of the world’s smallest and least known species, and access areas that are otherwise inaccessible,” Debbie Saunders from the ANU Fenner School of Environment and Society told the news source.

However, the researchers note that the drone could still use some improvement before it goes out to other scientists around the world.

The Drone Movement
Drones have not always been in the news for good reasons, but the Federal Aviation Administration may finally be opening up to the idea of these little flying machines. In fact, the FAA has already granted permission to 1,300 businesses and individuals to fly drones, according to NPR. However, not everyone is getting the green light — specifically those without flying experience.

“The whole idea of these drones coming into conflict with other aircraft is something that I’m extremely concerned about,” FAA Administrator Michael Huerta told the news source. “There are a lot of people operating model unmanned aircraft with little or no aviation experience. They’re buying them at hobby shops. They’re buying them at camera stores. So the whole concept of what are the rules of the air is a very new thing to them.”

While the future of drones remains relatively “up in the air,” one thing is for certain — it’s hard to question the value these devices provide to researchers and scientists. In fact, it may be what pushes the FAA over the edge as it continues to weigh regulations.