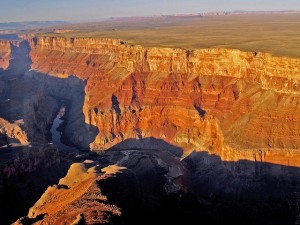 If you haven’t had a chance to explore the Grand Canyon in all its splendor just yet, you may want to hustle over there before it’s altered by pollutants.

More specifically, the wildlife and plant life that are known to inhabit the Grand Canyon might be in grave danger. On Aug. 19, the U.S. Geological Survey released a study titled Environmental Toxicology and Chemistry, which showed that pollutants are slowly but surely flooding into the canyon. Specifically, mercury is posing a threat to the living creatures in the area.

The study looked at food webs within six sites of the Colorado River. They found that mercury and selenium concentrations in the minnows and invertebrates were extremely high, surpassing wildlife toxicity thresholds. These toxins could become dangerous if ingested by humans, as well as local animals.

âWe also found some surprising patterns of mercury in rainbow trout in the Grand Canyon,” said Ted Kennedy, USGS researcher and co-author of the study. “Biomagnification usually leads to large fish having higher concentrations of mercury than small fish. But we found the opposite pattern, where small, 3-inch rainbow trout in the Grand Canyon had higher concentrations than the larger rainbow trout that anglers target. This inverted pattern likely has something to do with the novel food web structure that has developed in Grand Canyon.”

So where are all of these pollutants coming from?

Far, far away, according to researchers. In fact, the study is a prime example of how even the most remote ecosystems are prone to the bio-accumulation of contaminants. Airborne transport and deposition is thought to be the biggest contributor to contaminants in the Grand Canyon. However, toxins such as mercury could have traveled up-and-downstream into the Colorado River as well. Selenium and mercury are known to reduce reproductive success, growth, and survival in fish and wildlife.

At the moment, additional studies are being planned to determine the risks associated with humans and the consumption of fish from the area. For now, it’s probably a good idea not to eat anything from the Canyon — and unfortunately, a solution may not be coming for quite some time.

“Managing exposure risks in the Grand Canyon will be a challenge, because sources and transport mechanisms of mercury and selenium extend far beyond Grand Canyon boundaries,” Walters continued.

But it’s still a good spot for a photo opportunity, right?