Winston Churchill is perhaps best known for his role as British Prime Minister, but many might not know that he also had an opinion on extraterrestrials. Now, one researcher has dissected Churchill’s writing to give us a closer look at what the former PM thought about life elsewhere in our universe.

In February, news broke that a long-lost essay written by Churchill had been discovered last year, and it addressed everything from astrophysics to alien life. Astrophysicist Mario Livio looked into the piece and Churchill’s general thoughts on the matters in Nature. (Livio, 2017) 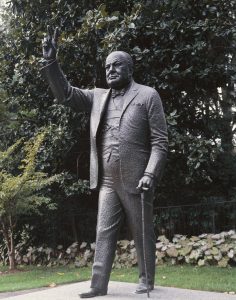 “With hundreds of thousands of nebulae, each containing thousands of millions of suns, the odds are enormous that there must be immense numbers which possess planets whose circumstances would not render life impossible,” Churchill wrote.

While this may seem like “old news” to us today, it’s important to remember that the prime minister jotted down these thoughts more than half a century before exoplanets were discovered.

“To me the most impressive part of the essay—other than the fact that he was interested in it at all, which is pretty remarkable—is really the way that he thinks,” Livio told Smithsonian Magazine. (Handwerk, n.d.) “He approached the problem just as a scientist today would. To answer his question ‘Are we alone in the universe?’ he started by defining life. Then he said, ‘OK, what does life require? What are the necessary conditions for life to exist?’”

The prime minister was able to narrow down the options to water, which is what we still use today to gauge whether life exists on other planets. Livio also noted that Churchill hypothesized that planets need environments that support liquid water in order for life to be present. Today, we call this a “habitable zone.”

“Taking all these elements together, he concludes that Mars and Venus are the only places in the Solar System other than Earth that could harbor life,” Livio wrote in his report. “He eliminates the outer planets (too cold); Mercury (too hot on the sunny side and too cold on the other); and the Moon and asteroids (their gravities are too weak to trap atmospheres).”

Churchill was thought to have started writing the essay shortly after the 1938 U.S. broadcast of “The War of the Worlds,” which created “Mars fever” in the media. Livio applauded the leader’s “healthy skepticism” during an evolving time in history.