On August 21, most of North America will have its collective eye on the sky in anticipation of the solar eclipse that hasn’t been seen in this part of the world for 99 years. If you are one of the lucky individuals to be along the path when the eclipse occurs, you will be treated with a spectacular show as the moon, in its new moon phase, passes in front of the sun, aligning perfectly to block the light. If you are observing the phenomenon through approved eclipse eyewear, as you should be to prevent permanent damage to your eyes, you may be able to observe Baily’s Beads, a short-lived event that signals to beginning and end of the totality.

Baily’s Beads are named for a British astronomer, Francis Baily (1774-1844), who noted them during a solar eclipse on May 15, 1836, in Roxburghshire. His vivid descriptions of this phenomenon were widely circulated and drew even more attention to the solar eclipse of July 8, 1842. Baily himself traveled to Pavia, Italy, so he could observe the beads again. Although Baily gets the naming rights, he was not the first to document the appearance of the beads. Sir Edmund Halley, who got to name a famous comet, is often credited with being the first to write about Baily’s Beads, which he observed during an eclipse on April 22, 1715. Colin Maclaurin also noted them during the March 1, 1737 eclipse in Edinburgh, and by Samuel Williams in the United States during the October 27, 1780 eclipse. 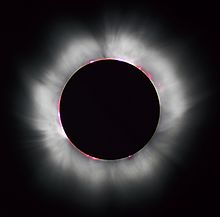 Baily’s Beads are caused by the irregularities in the moon’s surface…mountains and valleys. When the moon passed over the sun during the eclipse, just before totality, a thin sliver of the crescent-shaped sunlight can be seen. As it narrows, the moon’s irregularities break up the sunlight in several places and we observe a string of “beads” of sunlight. Because Baily’s Beads can only be witnessed when the moon’s surface is very close to entirely covering the sun, observers can possibly glimpse them twice…immediately before and immediately after totality. In fact, the presence of Baily’s Beads is the best indicator that totality is moments away.

The phenomenon of Baily’s Beads lasts only a short time because it relies on the points and ridges of the moon’s surface to create a stencil effect with the sunlight. As the moon closes the gap of sunlight, the beads quickly disappear. To observe Baily’s Beads, you must wear protective eyewear. Starring directly into the sun can cause lifelong damage to your eyes. It is possible to photography or video record the Baily’s Bead phenomenon; however, you may need filters to adequately capture the event. Photographing the eclipse is somewhat tricky as the sky goes from extremely bright to dark very quickly. Automated settings on cameras and recorders can often make the adjustment faster than we can to catch the fleeting Baily’s Beads. C.F. Hines, a member of the Philadelphia Photographic Corps, was the first to successfully photograph Baily’s Beads, which he observed during the August 7, 1869 eclipse in Ottumwa, Iowa. Today’s cameras are a bit more advanced, making it easier to capture the moment on film.

Mark your calendar for August 21 and train your eyes to the skies if you are near the path of the eclipse. Not only will you be rewarded with one of the cosmos’s most impressive shows, but you may get a glimpse of what Colin Maclaurin, Edmund Halley, and Samuel Williams all observed more than a century ago and what Francis Baily so popularly documented and named…Baily’s Beads.