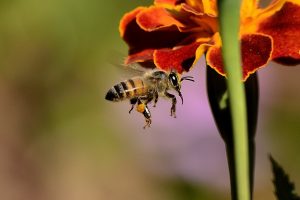 Bees are the little garden insects with fail to think twice about, but now that they are endangered, perhaps more attention will be paid to them. The U.S. Fish and Wildlife Service has given endangered species status to seven species of yellow-faced bees that are native to the islands of Hawaii. They are now the first bees in the country to be protected under the Endangered Species Act.

The yellow-faced bees are recognized by their yellow-to-white facial markings. Although they look like small wasps, they are actually bees. They have “plumose [branched] hairs on the body that are longest on the sides of the thorax, which readily distinguish them from wasps.”

In a report published in the Federal Register, the yellow-faced bees that made the list are only native bees to Hawaii. Their populations continue to shrink, despite once being common in dozens of locations around the islands. The most common threats to the bees are habitat destruction, the introduction of non-native plant species, wildfires, non-native predators, and natural events.

Now that they have protected status, authorities will be able to implement recovery programs and access funding for more assistance.

Threats to Bees Around the World

Bees are not just in danger in the U.S. Previous research has honed in on some of the many threats facing pollinators around the world.

“Wild pollinators in certain regions, especially bees and butterflies, are being threatened by a variety of factors,” said IPBES Vice-Chair, Sir Robert Watson. “Their decline is primarily due to changes in land use, intensive agricultural practices and pesticide use, alien invasive species, diseases and pests, and climate change.”

In general, extinction is not something that should be ignored, in terms of pollinators. Approximately 75 percent of the world’s food crops at least partly depend on pollination in order to grow and thrive.

Even on the most basic level, humans can take proactive steps to help pollinators, such as bees. Reducing pesticide use, maintaining diverse pollinator habitats, and implementing crop rotation can benefit these types of pollinators.