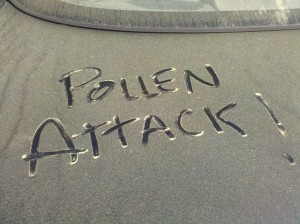 Boston set a new record for snowfall last winter, andÂ pretty much everyone in the area wants to just leave it in the past. However, it’s hard to do so when you’re sneezing endlessly.

Medical experts now say that this past winter could be to blame forÂ horrendous seasonal allergies. Although the amount of pollen isn’t more than it was last year, everything hit the air at once, according to Pam Cormier, a nurse director at the Brookside Community Health Center.

“This allergy season isn’t necessarily worse than last year in terms of pollen count or anything like that, but it all happened at once,” she told the Metro. “Everything bloomed all at once and that’s what is hitting people so hard.”

The extremely cold temperatures and late blizzards of Boston’s winter have contributed to the massive allergy problem. Typically, different kinds of pollen would be entering the environment at different times — not all at once.

“Patients are getting slammed by birch, maple and pine pollen, but that’s what happens this time of year,” Cormier said.

Pollen counts in the area could begin to dip as early as June, providing some relief to allergy sufferers. However, ragweed and hay will arrive once summer comes to an end and fall peeks around the corner.

Allergies, Pollen and the Environment

Most people can assume that the three things have ties to each other, but how? Believe it or not, climate change (and the environment in general) plays a key role in our allergies. As global warming results in earlier springs, seasonal allergies are popping up sooner.Â Additionally, more people seem to be using the Internet andÂ searching “pollen,” “allergies” and “Claritin” more frequently during abnormally warm spring seasons. Analytics show that with longer seasonal allergy seasons, people are suffering the wrath of pollen for extended periods of time.

It’s also worth noting that warming temperatures and CO2 in the atmosphere is stimulating plant growth. As a result, plants are creating more pollen (and more irritation for allergy sufferers).

As anyone with allergies can tell you, the condition is more than a nuisance. The National Climate Assessment has found that the effects of pollen can diminish productive work at both school and work. Sneezing, coughing and headaches canÂ turn anyone into a miserable person within minutes. Combine that with a sinus infection, and everything suddenly becomesÂ a struggle.

Of course, allergy experts recommend over-the-counter antihistamines to treat the symptoms — but as Bostonians being pelted with pollen may tell you, just stay inside.