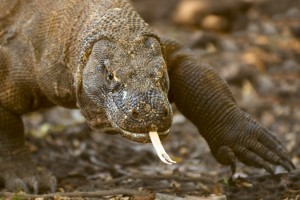 When you think of dragons, you likely think of “Game of Thrones” here in 2015, but did you know that they really exist? The Komodo dragon, more specifically, still roams the planet (and our zoos). Recently, one of these creatures made headlines for its bad behavior.

At the Henry Doorly Zoo and Aquarium in Nebraska, a female employee was bitten by one of the facility’s Komodo dragons. She received stitches at the hospital on her hand after the cut from the bite would not clot — Komodo dragons have venom in their saliva that prevent blood clotting (who knew?). After aÂ short visit to the emergency room, the employee went home the same day.

However, this isn’t the first time that an incident like this has occurred at the zoo. In 2009, the head veterinarian was bitten by a Malaysian tiger. Safety seems to be a concern at the facility, especially considering the fact that Komodo dragons are typically disinterested in humans.

But whatÂ areÂ the dangers associated withÂ Komodo dragons if they are usually docile? Are there any real risks involved with approachingÂ these modern-day dragons?

The Real Scoop on Komodo Dragons

Kenneth Morgan, the manager of reptiles at Arizona’s Phoenix Zoo, says that Komodo dragonsÂ canÂ be dangerous. However, much of it depends on the animal’s temperament — each animal has its own, according to Morgan. For this reason, one Komodo dragon in captivity may not be “more polite” than another. That being said, their personalities can be dependent on their age as well.

“When these animals are young, they’re naÃ¯ve in terms of learning what’s food and what’s not food,” Morgan told LiveScience.

The Komodo dragon that bit the Nebraska zoo employee happened to be young, which could explain the incident. However, there’s no telling whatÂ reallyÂ goes through the mind of one of these lizards, which happen to be the largest species in the world.

Komodo dragons are considered to be predators. They have the ability to take down animals as large as deer and wild boar, and they have been known to attack humans (though rarely). In 2009, it was discovered that the dragons have venom glands behind their teeth, which help them take down prey. The venom prevents clotting and lowers the blood pressure of the victim.

Wild Komodo dragons can be primarily found on the Lesser Sunda Islands of Indonesia, so unless you go looking for them, the chances of coming across one in daily life is rare. However, these dragons are very obviouslyÂ dangerous — and living alongside us on this planet. It’s a bit more scary to think about than the fictional dragons of “Game of Thrones,” don’t you agree?

Paleontologist: The T-Rex May Have Been a Cannibal