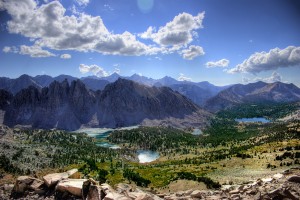 “We’re not only setting a new low; we’re completely obliterating the previous record.”

This is a statement from Dave Rizzardo, chief of the California Department of Water Resources. It was a part of his news conference that took place on April 1, detailing the dire drought situation in California. The snowpack in the state’s mountains have dried upÂ soÂ much that it has shattered previous records, making it the driest in 100 years.

For those of you who haven’t been keeping up with the drought situation, it’s important to note that the Sierra Nevada snowpack provides 30 percent of California’s water. This year, the snowpack’s water content is just 5 percent of the average amount in northern Sierra Nevada, and 6 percent of the average amount in the southern and central areas. In four other sites that were surveyed, there was no snow at all, according to LiveScience. Essentially, the snowpack has been wiped out, which has state officials on edge.

California Governor Jerry Brown announced the state’s first-ever mandatory water restrictions on April 1. City officials have to cut urban water use by 25 percent. Homeowners will have to say good-bye to their lush, green lawns when they reduce outdoor water usage to comply with regulations. As the heat intensifies with the arrival of summer, some communities could run out of water. In many instances, rural communities are alreadyÂ facing a complete water shortage.

The Impact on the Rest of the U.S.

You might already be saying, “I don’t live in California, this won’t affect me.” However, the fact of the matter is that everyone will feel the California drought, regardless of their physical location in the U.S.

For instance, the state produces half of the country’s fruits and vegetables, according to the International Business Times. As soon as this produce begins to dwindle, Americans can expect to see higher prices at the grocery store.

Additionally, this may not be the last time that we see a situation like this occur in California. Climatic shifts, such as rising sea levels, could eventually cost billions of dollars for the state as a result of property loss and damage. A study from Stanford University also recently showed that human emissions have increased the odds of lower-than-normal precipitation and higher-than-average temperatures in California. In turn, long periods of drought may not be uncommon in the future.

While it’s scary to ponderÂ a lack of water (one of our most basic necessities), it’s now a reality for California residents. The question is, how long will it be before the rest of the country faces this new norm?