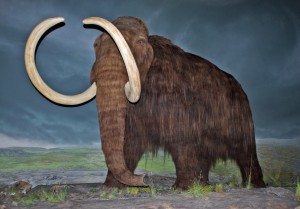 Could you picture a woolly mammoth at your local zoo? What about walking throughÂ a heavily wooded area out in the wild?

Some scientists want to live to see the woolly mammoth resurrected, according to recent news out of Harvard University. A team of researchers has announced that they are astonishingly close to bringing back the extinct giant, which hasn’t been around for more than 4,000 years. Thanks to clustered regularly interspaced short palindromic repeat (CRISPR) technology, scientists have been able to insert 14 mammoth genes into an elephant’s skin cells.

Because the animal’s phenotypes have not been decoded, the insertion process has not been completed.Â However, the researchers believe that one day, we could very well see the woolly mammoth come back to life.

So is there hope for any of these extinct creatures?

1. Dodo Bird
Aggressive human population wiped out this creature around the 17th century. The Dodo bird, a flightless bird,Â once lived near the island of Madagascar in the Indian Ocean on Mauritius. Today, its closest relatives are doves and pigeons.

3. Sea Mink
You can only assume that a minkÂ would naturally be endangered. This subspecies, which once lived along the coast of Maine, has been driven to extinction. The Sea Mink was hunted extensively during the end of the 19th century after people started demanding its fur.

4. Baiji River Dolphin
This majestic dolphinÂ has been endangered since 1996, and it may have seen its last days on Earth. The last confirmed sighting of the animal was in 2001, and none have been spotted in the Yangtze River in China, where is known to live. Dams, pollution and heavy ship traffic eventually drove these animals to extinction.

5. Javan Tiger
The Javan Tiger used to call Java, Indonesia, its home. However, the animal is now extinct as a result of hunting, loss of forest habitat, and a lack of prey. The last Javan Tigers were spotted in 1976, and after further research, they were declared extinct in 2003.

As you can tell by some of these dates, animals are quickly going extinct in the 21st century — this isn’t just an issue that plagued our forefathers. That being said, there are many ways you can help and preserve your environment.

Much of extinction has to do with habitat destruction, and some of it can be linked to global warming, according to the World Wildlife Fund for Nature. Doing your part to reduce your carbon footprint through acts like recycling and limiting energy consumption can make a difference.

Becoming more aware of the items you buy — especially in foreign countries — can help as well. For instance, some souvenirs may be made of animal hooves or horns, which could be from endangered species. Trace the origin of the products you purchase to ensure you aren’t enabling poachers and other people looking to destroy endangered wildlife.

By simply being more conscious of the choices you make every day, you can contribute to the preservation of the planet’s most threatened species.