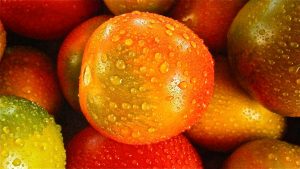 When you bring your fruits and vegetables home from the grocery store, do you wash them before you eat? As it turns out, your efforts might not be enough.

Recently, food scientist Lili He from the University of Massachusetts Amherst wanted to take a look at what happens when water is used to rinse pesticides from items, such as apples. She also wanted to determine if factory washing was enough to eliminate the toxins before the food reaches consumers (Yang et al., 2017).

In the end, she found that factory washing was not enough to get rid of pesticide residue from fruits and vegetables. In addition, bringing home the produce and washing it again under water was not effective.

The most efficient way of “cleaning” fruits and vegetables was by using baking soda. The study showed that it made it easier to remove two common pesticide residues: phosmet and thiabendazole. Baking soda was even more effective than bleach.

However, He concluded that there is no foolproof way of eliminating all pesticide residue from produce. This is because thiabendazole, in particular, is a “systemic” pesticide. This means that it penetrates below the surface of the fruit or vegetable’s skin.

“The further the pesticides got penetrated in, the harder it was to wash away,” He told CNN, in regards to testing during the study (Nedelman, 2017).

Despite this study, experts still highly recommend rinsing fruits and vegetables before consumption. There are also certain cooking methods that can work to eliminate pesticide levels as well. For example, blanching or juicing can lower residue levels, according to Dr. Motoko Mukai, a toxicologist in the Department of Food Science at Cornell University’s College of Agriculture and Life Sciences.

Overall, the level of pesticide residue remaining on fruits and vegetables by the time they reach consumers is typically harmless. That being said, there are still steps you can take to limit your intake of these chemicals. Growing your own fruits and vegetables at home can allow you to regulate what and how much you consume when it comes time to eat. You can also make it a point to buy organic produce from a local vendor – a producer that you know does not use pesticides or herbicides on fruits and vegetables.

Take the time to do your homework before you shop. Speak to produce providers to find out where they are getting their food. In the end, you can get a better idea of what you are putting in your body.

What Are Pesticides and Are They Really Harmful?

Confusion in the Produce Aisle: Team Fruit vs Team Veggie