Pop Quiz – What animal is responsible for the most human deaths every year?

If you said “shark” or “alligator” or “snake”, you would be wrong. Sure, these animals are dangerous, but they actually result in very few human deaths each year. The animal that poses the biggest threat to humans is the mosquito. Mosquitoes transmit diseases from one person to another via their bites, but this was not always known. It took one observant doctor who continued to study the link between mosquito bites and the spread of malaria and yellow fever even after his hypothesis was ridiculed by his peers before it was definitively proven that the pesky insect is the vector for disease.

This physician was Dr. Carlos Juan Finlay, Cuban-born doctor. Finlay, the son of a Scottish doctor and a French mother who relocated to Cuba, was born in Cuba in 1833 and educated in France, Cuba, and the United States. In fact, he earned his medical degree from Jefferson Medical College in Philadelphia. Carlos Juan Finlay returned to Cuba in 1855 to set up his medical practice in Havana. In between treating his patients, Finlay devoted his time to medical research. At the time, people living in Cuba often suffered from outbreaks of malaria and yellow fever. Dr. Finlay was determined to find the cause of these outbreaks. 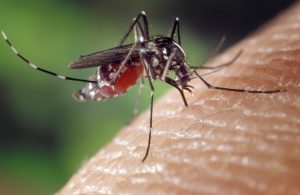 At this time, other physicians were also working to solve the mystery of the causes of both yellow fever and malaria. They pointed to the heat and humidity as the potential culprit, as well as the unsanitary living conditions in some areas of the country. During his own research, Finlay noted one curious connection between his patients that had contracted yellow fever or malaria…they all had numerous mosquito bites. He began to explore the possibility that the illnesses were being carried and spread by the annoying insect. He theorized that yellow fever specifically was carried by the genus Aedes and that neither malaria nor yellow fever could pass from person to person directly. Both diseases, he believed, needed a vector, or a carrier, and he concluded that the mosquito was that vector.

Carlos Juan Finlay wrote his findings in a scientific paper. In 1871, he was asked to come to the United States to present his theory before a panel of other respected doctors. It did not go well for Dr. Finlay. The American doctors dismissed his findings and discounted his theory. There was no way that the mosquito carried malaria and yellow fever from person to person. To these doctors and medical researchers, this idea was illogical. Finlay returned to his practice in Cuba, dejected but not defeated. He continued researching the causes of yellow fever and malaria.

Fast forward to the Spanish-American War in 1898. American soldiers going to Cuba were falling victim to both diseases. A few years later, when American engineers and workers began construction on the Panama Canal, they also encountered outbreaks of yellow fever and malaria. Now, because it was directly impacting American interests, the United States government was finally taking notice of the two diseases. The U.S. government appointed Walter Reed, an Army surgeon, to put together a panel of experts to address the problem. Carlos Juan Finlay was included in this commission and he invited that entire panel to come to Cuba to review his thirty-plus years of research.

Just like the 1871 incident when Finlay presented his findings in the United States, the panel of doctors and medical researchers, including Walter Reed, initially rejected Finlay’s research, but this time, Finlay refused to accept their criticism. Instead, he carefully took the group through his years of research and observations until they, too, reached the same conclusion as he had…the mosquito was the vector that spread viruses, particularly yellow fever and malaria, from person to person.

This realization was instrumental in the completion of the Panama Canal, one of the greatest engineering marvels of the twentieth century. The narrow isthmus of Panama had been eyed for some time as the ideal spot for a canal that would improve shipping between the Atlantic and Pacific oceans. French engineers, fresh from their success of building the Suez Canal in Egypt, tackled the Panama Canal project beginning in 1881 but they encountered an obstacle that they hadn’t in Egypt…disease.

During the time that the French worked on the construction of the Panama Canal, from 1881 to 1889, more than 22,000 French and Panamanian workers succumbed to yellow fever and malaria. The death toll was too much for the French and they abandoned the project in 1889.

Twelve years later, the United States took up the construction project. Based on the findings of Carlos Juan Finlay, that was published in the Reed Commission Report, the American engineers made efforts to reduce the mosquito population in the construction zone prior to bringing in the thousands of workers. In fact, they spent two and a half years preparing the region by filling in wetlands and swamps, draining away stagnant water, removing overgrowth, and constructing housing with screened windows and sleeping quarters with mosquito netting to protect the workers. A secure sick bay was established to quarantine workers who were sickened with either malaria or yellow fever so that mosquitoes could not bite them and then infect others. Workers lit smudges and used smoke to keep the insects at bay.

The efforts were successful. The American phase of the construction of the Panama Canal saw significantly fewer deaths from malaria and yellow fever than the previous attempt. As a result, the canal was completed in a few years and trade lines between the Atlantic and Pacific oceans became much easier and faster.

Carlos Juan Finlay continued his research linking mosquitoes and the spread of disease. He authored more than forty medical and scientific articles on the topic. Seven times Finlay was nominated for a Nobel Prize in physiology but he never won the coveted award. He was, however, honored with a Legion of Honour Award from France in 1908. Finlay no doubt felt vindicated after so many years of the scientific and medical community dismissing his research when General Leonard Wood, who served as the United States’ military governor of Cuba from 1898 to 1902 said, “The confirmation of Dr. Finlay’s doctrine is the greatest step forward made in medical science since Jenner’s discovery of the vaccination.”