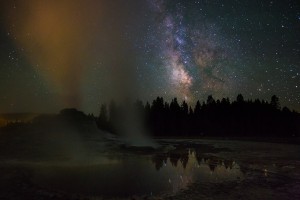 It’s all finally coming to an end.

The Universe is ready to say farewell, according to an international team of scientists. Researchers have charted its decline into darkness after analyzing its energy output, the Christian Science Monitor reports. As it turns out, our universe is only generating half as much energy as it did about two billion years ago. To come to this conclusion, scientists examined more than 200,000 galaxies.

However, experts have had a hunch that our universe has been on its way out since the 1990s. The most recent research shows that fading is occurring in all wavelengths from the ultraviolet to the infrared.

“The Universe will decline from here on in, sliding gently into old age,” Simon Driver, the lead author of the research and an astronomer at the University of Western Australia, told the Los Angeles Times. “The Universe has basically sat down on the sofa, pulled up a blanket and is about to nod off for an eternal doze.”

So what exactly do we do? Is it time to board a rocket ship to find a suitable planet in a neighboring universe?

As the researchers note, there’s no need to panic just yet. In fact, there’s a good chance that none of us will be around by the time the Universe fizzles out.

The bottom line: there are a lot of things that could happen to us before our universe dies. Also, let’s not forget about some of the killers that exist on our own planet. Let’s take a look at the odds of perishing due to reasons other than our little universe.

In short, we may want to concern ourselves more with getting an annual physical and using a little ice melt on sidewalks during the winter. Don’t blame the Universe for all of your problems just yet.