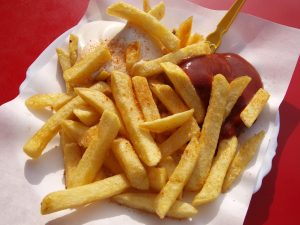 If you’re the type of person who chows down meals in a short amount of time, you might not be doing your body any favors. At least this is according to a new study, which suggests that eating quickly may contribute to conditions, including obesity (“Eating slowly may help prevent obesity, say researchers,” 2018).

Researchers from Japan drew these conclusions after looking at data collected through health checkups and claims from more than 59,700 people (“Effects of changes in eating speed on obesity in patients with diabetes: a secondary analysis of longitudinal health check-up data,” 2018). The information spanned from 2008 to mid-2013. During their health checkups, the survey participants were asked questions about their lifestyles, one of which pertained to their eating speed. They were also asked whether they snacked after dinner three times or more a week, and whether they skipped breakfast three times a week or more.

“Interventions aimed at altering eating habits, such as education initiatives and programs to reduce eating speed, may be useful in preventing obesity and reducing the risk of non-communicable diseases,” the authors concluded in their report.

However, eating speed wasn’t the only factor that appeared to contribute to obesity. When the researchers looked further into the data, they realized that sleep and breakfast played a role in obesity as well. In combination with slower eating speed, no sleep loss, not regularly skipping breakfast, and not eating dinner before bedtime helped study participants maintain a healthy weight.

“The speed at which a lot of people wolf down their food is undeniably a contributor to obesity,” Tam Fry, chairman of the National Obesity Forum, told The Guardian. “It takes fast eaters longer to feel full simply because they don’t allow time for the gut hormones to tell the brain to stop eating. Eating quickly also causes bigger blood sugar fluctuations which can lead to insulin resistance.”

It’s worth noting that the study only focused on participants who already had type 2 diabetes, and it did not take levels of physical exercise into account. The amount of food eaten each day by the participants was also not accounted for in this particular study.

Hurst, Yumi. “Effects of changes in eating speed on obesity in patients with diabetes: a secondary analysis of longitudinal health check-up data.” Retrieved February 19, 2018, from http://bmjopen.bmj.com/content/8/1/e019589.

Could Leafy Green Vegetables Be the Key to Preventing Dementia?