Scientists have known for years that crows have a lot more intelligence that we give them credit for. These common birds can solve puzzles and figure out tools. They even remember the faces of humans and if someone every does wrong to a crow, they can expect years of harassment from that crow and all his crow friends. But crows also appear to mourn their dead, much like humans do, but with a bit less fanfare.

In the animal world, usually an animal only spares a passing interest when a member of its species dies. There only a few exceptions to this…dolphins, elephants, and chimpanzees, for example. For crows, as well as magpies and jays, they take a fallen comrade seriously and will gather together over the deceased. A gathering of crows is, incidentally, called a “murder” but that doesn’t mean there is foul play involved when a crow dies. New research seems to indicate that crows mob together over a dead buddy not as a way to grieve his passing, but to analyze the circumstances of his death and assess the danger to the other crows. The information the crows gather from the death scene could be useful in helping the crows avoid a similar fate.

When a murder of crows gathers at for a crow funeral, they exhibit a form of aggressive behavior known as mobbing. They are overly vocal, calling to each other and fawning over the fallen bird. Studies indicate that crows use the death of a comrade to learn more about threats and predators in the area. The calls of dying crows trigger the funeral response in surrounding crows. Researchers have used audio recordings of dying crows to signal other birds in an area and have found that the recording produce an anti-predator behavior in the crows, triggering mobbing response. 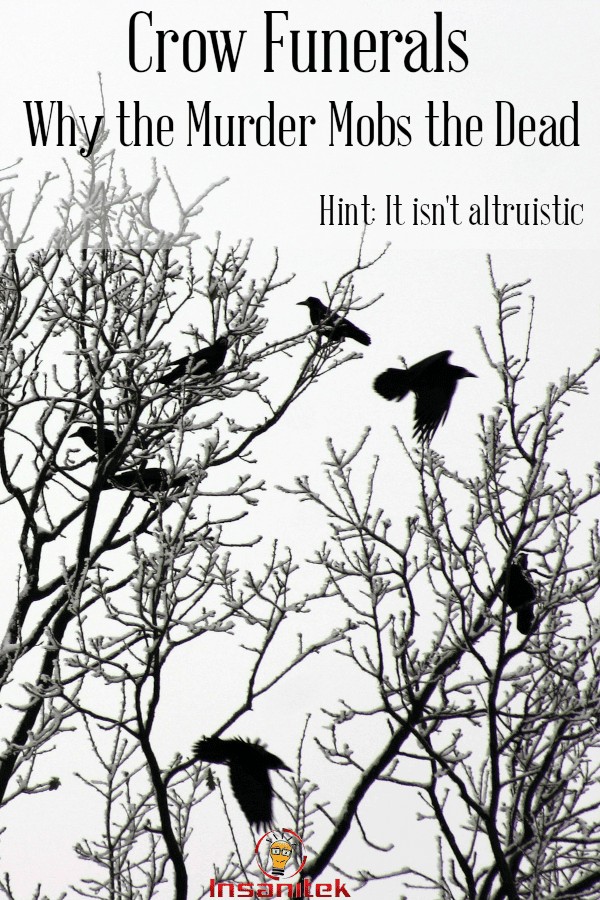 Crows pay attention to areas where they had attended crow funerals. Studies have shown that the crows tend to avoid these areas in the months and years after a crow has died, even if there is plenty of food in the area.

Since crows have the ability to associate a dead friend with a threatening place, researchers wanted to know if the crows could differentiate between the specific predators or threats. To find this out, scientists had to develop a way to conduct their experiments. First they found a place to do the testing and made sure there was plenty of food there in the weeks leading up to the experiments. That way, there were sure to have plenty of test subjects.

Next, the researchers acquired a taxidermy crow that was posed to look like it had just died and a taxidermy red-tailed hawk, arranged to look very much alive. A team of volunteers would go into the designated area carrying either the dead crow or the hawk, or both. Because crows are masters at facial recognition, the volunteers wore masks to hide their faces and facial expressions.

The crows reacted aggressively, mobbing the volunteer holding the dead crow. The birds were vocally scolding the volunteer and calling to each other. When the hawk was present, the crows still engaged in mobbing, but were louder with their cries and stayed closer to the dead crow. Afterwards, all the crows were more cautious about returning to the place and avoid the abundant food that was there.

To take the experiment one step farther, a volunteer was sent in carrying a dead pigeon. The crows ignore the pigeon and did not engage in aggressive funeral behavior, proving to the researchers that the funeral response is species specific. Additionally, the crows showed that they had learned to associate the death of their fellow crow with the human volunteer. When that volunteer entered the area again, the crows responded with a different call than the ones they used for other people, clearly showing that the birds were alerting others to a possible threat.

While crows don’t send flowers or cards of condolence when a member of their murder dies, they do exhibit behavior that shows researchers that the birds are cognizant of the finality of death, as well as their own mortality. Not only that, but they communicate the news of a crow’s death to others and exhibit a high capacity for memories, including human facial recognition. That’s pretty impressive advances for a bunch of birds.

Link to video mentioned in the featured image.

Do We Know When We Die? These Scientists Say Yes

Wings and Eggs: The Egg-Stonishing Reason for Egg Morphology