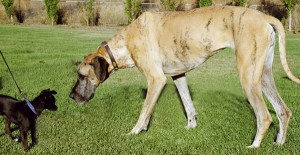 The similarities between wolves and domesticated dogs is fairly obvious to us today, but exactly how long ago did our pups split from their descendants?

Research published in Current Biology shows that it may have been more recently than we originally thought. The current assumption is that it occurred 15,000 years ago while humans were evolving from hunter-gatherers to farmers. However, DNA evidence now shows that dogs might have started to leave their wolf brothers around 27,000 years ago. In turn, researchers believe that this may explain why dogs have a stronger bond to humans.

There are several assumptions about how dogs eventually became human companions. One thought is that they simply started following us around. Another is that we caught wolf cubs and domesticated them over time.

Researchers were able to use DNA to identify the genetic code of the ancient dog, and they found that it was half way between dogs and wolves. This contrasts results from a genetic study of modern dog DNA that showed the wolf-dog split around 15,000 years ago. That being said, the study authors noted that research on this topic is continuous.

The Future of Dogs

Dogs have come a long way since their beginnings as members of the wolf pack. Today, there are a wide variety of food, toy and clothing options for our furry little friends. To put it lightly, dogs in our age are truly living the pampered life.

But what would happen if the world were to end today?

The topic of our dogs’ past has brought to mind their future for me, specifically an episode of “Life After People” on the History Channel. Call it what you want, but this show — which gives us a digital glimpse of what the planet will be once we’re gone — is downright scary.

In one of the first episodes of the show, dogs are addressed. Although the segment is brief, it goes on to say that if humans went extinct, dogs would likely return to their feral roots. However, the smaller of the pack (such as my chihuahua, for instance) would be overtaken by larger breeds — think of it as “survival of the fittest.” The dogs that win out would ultimately become scavengers on their quest to stay alive on our ravaged planet.

Is any of this true? Well, the show only touched briefly on the true future of dogs, and there were few statistics in between. Until the apocalypse happens, I don’t mind learning more about where my chihuahua came from. It would be even more interesting if we could link him to a big, bad wolf.