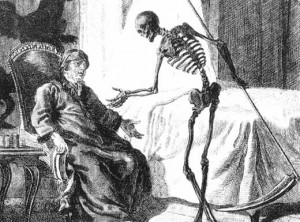 We would all ideally like to go out in a blaze of glory, but sometimes, death just isn’t that attractive. A new study led by New York State Cancer Registry Research Scientist Francis Boscoe gives us a glimpse into the most distinctive causes of deathÂ in various areas ofÂ the country.

The study shows that the most common causes of itÂ were heart disease and cancer. However,Â there were other distinguishing factors that fell slightly outside of the healthcare spectrum.

For instance, “legal intervention” was the leading factor in Nevada, Oregon and New Mexico. This can be defined as death by law enforcement officers or legal execution. Alaska’s primary causeÂ is “water, air and space, and other and unspecified transport accidents.” The researchers concluded that many people in Alaska appear to be meeting their deaths via plane or boat in the area.

Of course, Boscoe claims that the goal of study is to raise awareness of these causes (rather than scare the heck out of you). You shouldn’t necessarily be looking for the Grim Reaper around every corner just yet.

“Simply being aware of the issue often is enough to cause the change … it can often be a simple fix,” Boscoe told LiveScience.

In the end, the studyÂ highlights on key point — many of the distinguishable causes of death are health-related, and many of them can be prevented.

Let’s take a look at influenza, for example. The flu is a nasty bug that takes the top spot inÂ northern states including Maine, North Dakota and Wyoming. However, the seasonal influenza vaccine can dramatically cut down your chances of coming down with the illness. This can be especiallyÂ significant for individuals, such as children and the elderly, who are more susceptible to flu complications.

“Nutritional deficiencies” areÂ the primary distinguishable cause of death in North Carolina, New Hampshire, Vermont and Hawaii. While there are some underlying circumstances and health factors that can’t be addressed, it’s worth thinking about steps youÂ canÂ take if you live in these areas. Improving your diet, incorporating healthy food options and assessing your vitamin intake may just prevent you from becoming a statistic.

Unfortunately, the sad fact of the matter is that death is coming for all of us, but as they say, knowledge is power. Preventative care is alwaysÂ your best option in the fight to stay alive.