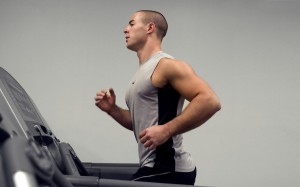 With more Americans becoming obsessed with losing weight, the treadmill seems like an obvious tool to use in the quest to be thin. However, more people appear to be taking safety less seriously in the process.

A study conducted by the U.S. Consumer Product Safety Commission shows that in 2014, there were more than 24,400 people injured on treadmills in theÂ United States. Additionally, there were 30 deaths linked to treadmills between 2003 and 2012, according to LiveScience.

Of course, not all of these cases were as a result of people working too hard in the machine. A recent story published in the New York Times raised awareness of a death of a 47-year-old man who died after falling off the machine and hitting his head. Notably, this man was none other than Dave Goldberg, the chief executive of SurveyMonkey and husband of Sheryl Sandberg, the chief operating officer of Facebook.

However, the topic of treadmill injuries (and exercise-related injuries in general) raises one big question — why are we so quick to hit the gym and work out? Furthermore, are we beyond checking safety precautions at a time when exercise is synonymous with looking good?

There were 62,600 injuries associated with exercise equipment in 2014, according to the CPSC. In some cases, people simply push themselves too hard.

“[When anyone collapses while exercising], I always worry about the heart,” Michael Jonesco, sports medicine physician at the Ohio State University Wexner Medical Center, told LiveScience.

But why shouldn’t you go for that extra mile on the treadmill, especially if you could lose an extra few pounds?

As it turns out, exercising too hard can cause serious damage to the heart, according to the National Institutes of Health. Long-term damage may include adverse structural damage, as well as stiffening of the arteries.

Instead of working yourself to the brink of exhaustion, think about other ways that you can improve your health and lifestyle. For example, eating right can help you see the results you want — researchers from the National Weight Control Registry have found that spacing food evenly throughout the day is the key to weight loss — no meal skipping!

Finally, ditch the old belief that sweat is the main indicator of weight loss. You don’t need to sweat ’til you’re dripping wet in order to burn calories, according to WebMD. Activities, such as walking, can burn just as many unnecessary calories. Best of all, you’ll feel better knowing you aren’t sacrificing your well-being to stay fit.

Study: Why Are People Dying in Your Neck of the Woods?