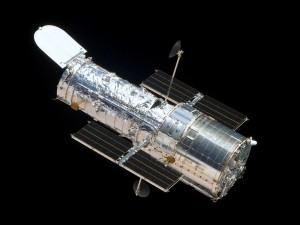 This month, the Hubble Space Telescope officially turns 25. To be more exact, it’ll celebrate its birthday on April 24. There’s no telling if a cake from NASA will be coming, but one thing is for certain — the Hubble has seen a lot over its years in the vast, dark world of space.

Hubble began its initial work as a part of a joint project between NASA and the European Space Agency, according to the Space.com. Ever since, it has been responsible for sending us eye-catching photographs of the universe.

“It has really allowed people to participate in the excitement of discovery,” Mario Livio, an astrophysicist based at the Space Telescope Science Institute in Baltimore, told Space.com.

The Hubble is expected to continue its journey in outer space for at least another five more years. However, Livio told the news source that it’s likely time for researchers to start developing a replacement.

“A more powerful telescope will be needed to place meaningful statistical constraints on how common or rare life in the galaxy is,” Livio wrote in the journal, Nature.

But before we get too ahead of ourselves, it’s worth looking at some of the most notable accomplishments of the Hubble to date. Only then can we appreciate the advancements we’ve made and truly plan for a more insightful future. Here are some of its many achievements, courtesy of NASA.

Of course, there are more accomplishments that go beyond this list. That being said, the Hubble Space Telescope has quite a resume. Can any telescope hope to surpass its success in the future?

“One with a mirror at least 12 meters across and with a resolution 25 times that of Hubble’s would be able to image a planet next to its star and detect spectrally the presence of oxygen and other biosignatures in its atmosphere,” said Livio.

Well, at least someone out there is already dreaming.