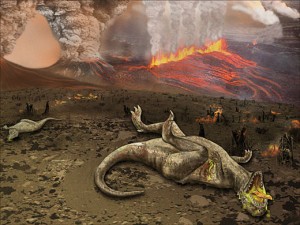 If you’ve been anxious about the next mass extinction, bad news: it’s already commenced. Scientists have found that species loss is currently 100 times greater than the expected rate. In short, we’ve already entered the sixth mass extinction, and soon we may face the same fate as the dinosaurs.

“The evidence is incontrovertible that recent extinction rates are unprecedented in human history and highly unusual in Earth’s history,” wrote the authors of the paper, published in Science Advances. “Our analysis emphasizes that our global society has started to destroy species of other organisms at an accelerating rate, initiating a mass extinction episode unparalleled for 65 million years.”

Gerardo Ceballos of the National Autonomous University of Mexico and his team conducted the research off of the most conservative extinction rates available. While other studies may have been criticized in the past for using exaggerated rates, these scientists explicitly tried to go the opposite direction. Now, their findings are effectively causing concern.

Climate change, overpopulation, land degradation and over-exploitation of animal species have all been factors in the rapid extinction. The type of loss described in the paper would be permanent in terms of a human time scale.

But before we all hit the panic button, it’s worth taking a step back and recognizing the silver lining (yes, there is one). Conservation efforts are widespread, and many of them have contributed to the protection of endangered species and habitats. Here are some noteworthy organizations and their achievements.

It isn’t set in stone that humans are going to quickly wipe themselves off the face of the planet, but the science shows that we’re working toward this fate. As you can see, many are conscious of our vulnerability — is it too late to conjure up a bit of hope based on their accomplishments? I like to think not.