It may sound like something you should’ve concerned yourself with back in the 1960s, but in today’s global political climate, you can never be too prepared for the unthinkable – a nuclear bomb drop. With countries (Looking at you, North Korea) testing missiles on a fairly regular basis, it helps to be educated on what to do in an emergency. Let’s take a realistic look at what you should do to prep for a nuclear bomb and what you can expect if one drops.

Preparing for a Blast

There’s a reason why previous generations went to the extent of building fallout shelters underground.

“After an explosion, there’s gonna be fallout and that fallout is gonna be intensely radioactive,” radiation safety expert Andy Karam told Inside Edition. “If you’re outside, that can kill you.”              (“How To Prepare For A Nuclear Blast In The Wake Of Tensions With North Korea,” n.d.)

If you’re willing to spend the money, investing in a fallout shelter isn’t a bad idea. In the event that you can’t splurge, setting up a basement or another underground area that you can go to in the event of a blast can help. Make sure it’s stocked with plenty of bottled water, energy bars, and of course, a hand crank radio to stay up to date on what’s happening above.

What to Do When the Bomb Drops 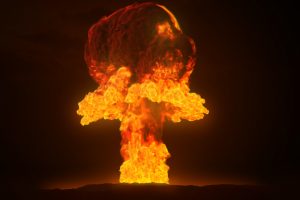 Don’t get into your car: When a bomb drops, the first thing you’ll want to do is hop in your car and drive far, far away. Unfortunately, everyone else is going to have the same idea, causing chaos on the road.

“Modern vehicles are made of glass and very light metals, and they offer almost no protection,” Brooke Buddemeier, a health physicist and radiation expert at Lawrence Livermore National Laboratory, told Business Insider. “You’re just going to sit on a road someplace” and be exposed (Mosher, 2017).

Do run for high-quality shelter: Your basement might be closer than the fallout shelter across the yard, but if the shelter is of higher quality, it’s worth the few extra minutes to get there (“How to Survive a Nuclear Explosion,” 2014).

Don’t return to damaged areas: Remember, places and items that are contaminated with radioactive material may not immediately appear to be dangerous. However, they can still be extremely hazardous to your health  (“Nuclear Blast | Ready.gov,” n.d.).

Of course, we should generally keep our fingers crossed that we’ll never have to use these tips. Now that you’ve read this, though, you’ll be prepared for whatever the world throws your way.

The Doomsday Clock: What Is It, and Is All Hope Really Lost?