Sleeping in on weekends might be something you look forward to, but what if you found out it was causing “jet lag?” As it turns out, you may not need to travel in order to feel similar side effects. 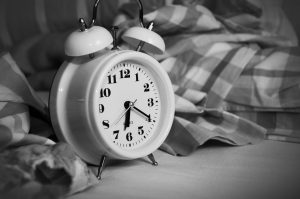 A new study looked at a concept called social jet lag, which may hit you if you decide to sleep “off-schedule” over a short period, such as the weekend1. Sierra Forbush of the University of Arizona and a team of researchers recently surveyed 984 adults between the ages of 22 and 60 to gauge their sleeping patterns. Forbush identified the mid-point between when a survey respondent would typically go to sleep and wake up, both on weekdays and weekends.

The goal was to determine the impact of social jet lag. Forbush and her team identified social jet lag as the “discrepancy between when the body wants to sleep vs. when it actually sleeps.”

According to the study, 22 percent of those who recorded an hour of social jet lag were more likely to claim their health was “good,” but not “excellent.” Twenty-eight percent were more inclined to define their health as “fair” or “poor.”

The researchers also believe that social jet lag can be linked to an increased risk of heart disease, fatigue and worsened mood.

“These results indicate that sleep regularity, beyond sleep duration alone, plays a significant role in our health,” said Forbush. “This suggests that a regular sleep schedule may be an effective, relatively simple, and inexpensive preventative treatment for heart disease as well as many other health problems.”

Resetting your internal clock may sound like something you’re interested in, especially if you’ve experienced social jet lag. However, it may involve a fair bit of self-discipline. 2

For starters, you need to be strict about your sleep schedule. Decide on a time you’re going to go to bed, and stick to it. Don’t fluctuate depending on the day of the week.

Next, avoid napping. Taking a nap during the day can interfere with your ability to fall asleep once bedtime rolls around.

Finally, do what you can to put your body in the mode for sleep every evening. This means avoiding bright lights and stimulants, such as caffeine or exercise. Think about developing a routine you can look forward to before bed involving “wind-down” activities, such as reading or taking a bubble bath. In the end, you might end up looking forward to resetting your internal clock!