Sometimes, scientists find resources to make medical advances in strange places. One of the latest is a child’s toy, and it may help reduce the cost of diagnosing diseases.

A centrifuge is a piece of equipment that rotates an object around a fixed axis. It is occasionally used in laboratories to separate fluids, gas or liquid. However, its easy-to-use, unusual nature also makes it a fun toy for children.

In a study published in Nature, scientists found that hand-powered centrifuges – similar to those that are used by children – can potentially help doctors identify diseases within blood samples. To draw their conclusions, researchers used a paper-constructed centrifuge (or “paperfuge”) based on the design of a whirligig, as identified circa 3,300 B.C.

“We demonstrate that the paperfuge can separate pure plasma from whole blood in less than 1.5 min, and isolate malaria parasites in 15 min,” wrote the scientists in their report. “We also show that paperfuge-like centrifugal microfluidic devices can be made of polydimethylsiloxane, plastic and 3D-printed polymeric materials.”

But why are we going back to an ancient design to solve modern problems? 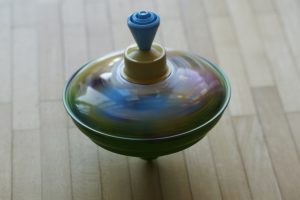 As the researchers note in their study, centrifugation is not always possible due to field conditions. The technology currently used for the process is often big and bulky, making it challenging to utilize in an emergency.

“The need for electricity-free centrifugal bio-separation solutions has prompted researchers to use egg-beaters and salad-spinners as proposed devices,” the researchers wrote in their study. “However, these suffer from bulky designs and extremely low rotational speeds (maximum 1,200 r.p.m.; 300 g), leading to impractical centrifugation times for a simple task of blood plasma separation (>10 min).”

And so, the answer appears to be this seemingly limited child’s toy.

Blood samples can be attached to the center disc of the centrifuge. When its strings are pulled, the cells inside of the sample separate (similar to a more expensive centrifuge). Afterward, the samples can be processed and tested for diseases and parasites.

When all is said and done, medical professionals will spend about 20 cents to create the “paperfuge.” After a little handy work, they can make them on their own out in the field.

But in case you’re curious about the more “advanced” side of the picture, the study researchers were able to create more than 100 paperfuges per day with a desktop 3-D printer. If necessary, these little toys can be mass-produced. However, this report proves that sometimes, small is better.

To Spend or Save on Lab Gear?

Report: Your Breath May Tell You How Prone You Are to Disease