Were you one of the kids who was allowed to have a television in your bedroom growing up? Do you allow your own children to watch television in their rooms before bed? A new study suggests that we might want to avoid doing so, and not only for the sake of sleep.

Recently, Iowa State University researchers conducted a study to find out exactly how having a television in the bedroom may impact kids in their daily lives. However, their objective wasn’t only to determine how it affects their sleep – they looked into how it impacted their behaviors and learning progress as well (“School, health and behavior suffer when children have TV, video games in bedroom – News Service – Iowa State University,” n.d.). 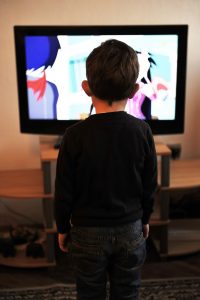 Douglas Gentile, the lead author of the study, concluded that when there was a television or video games in the kids’ bedrooms, they spent less time reading, sleeping or engaging in other activities. He claimed that these children did not do well in school, compared to their counterparts, and were at a greater risk for obesity and video game addiction .

“When most children turn on the TV alone in their bedroom, they’re probably not watching educational shows or playing educational games,” Gentile said. “Putting a TV in the bedroom gives children 24-hour access and privatizes it in a sense, so as a parent you monitor less and control their use of it less.”

Gentile acknowledged that this is not the first such study to look at television and video games in kids’ bedrooms. On average, children spend about 60 hours per week in front of a screen. National studies also show that more than 40 percent of kids (between the ages of 4 and 6) now have a TV in their bedroom.

“It’s a lot easier for parents to never allow a TV in the bedroom than it is to take it out,” Gentile notes. “It’s a question every parent must face, but there is a simple two-letter answer. That two-letter answer is tough, but it is worth it.”

If parents do not want to remove the television from their kids’ bedrooms, it might be helpful to ensure that the room also has other forms of non-screen entertainment (books, magazines, board games). Parents can also exercise discipline and limit screen time to ensure that the television does not interrupt studying or sleep (“Healthy Habits for TV, Video Games, and the Internet,” n.d.). When screen time is treated as a privilege, kids begin to gain a greater appreciation for it. They also start to understand that other tasks, such as homework, are essential to complete in order to engage in television-watching or video game playing.

WHO to Classify Video Game Addiction as a Mental Health Disorder

Does Screen Time Increase the Risk of Childhood ADHD?

The inner mind of a 7th grader