The vast sea of prairie grasslands that once comprised the Great Plains of the United States is nearly all gone. In fact, the National Park Service claims that there has been a 99% decline in tall grass prairie ecosystems and a 68% decline in mixed-grass prairies in the last 150 years, making prairie grasslands the most endangered ecosystem in North America. The advent of the railroad, which brought white settlers to the prairie states by the boxcar-full, was directly responsible for the destruction of the prairie grasslands that once covered millions of acres. Prairies have not totally vanished from the American landscape, however. In the past few decades, great strides have been made to restore prairies by reseeding them with native grasses. In an ironic twist, we have the railroad to thank for supplying us with these native prairie seeds. Here is how this lesson in irony played out.

We know that prairie grasslands once covered a large swath through the central United States, extending from the Canadian border south to Texas. This was open, predominantly treeless land that U.S. government and its citizens envisioned could easily become farm land. The Homestead Act of 1862 gave chunks of this land to settlers for free, providing they clear the land for agriculture and fence it in for pastures for grazing cattle.” Just a few years later, in 1869, the completion of the transcontinental railroad meant that this free land was easily accessible. 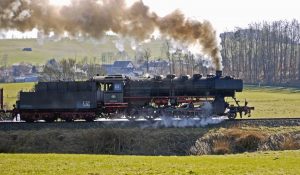 Soon, the railroad was transporting settlers, plows, tree saplings, barbed wire fencing, seeds, and cattle to the far reaches of the prairie. The grasses were plowed under and crops like wheat and corn were planted. The prairie states became America’s breadbasket. The railroad provided the means for the destruction of the prairies.

The Dust Bowl of the 1930s was a wakeup call that helped show farmers and environmentalist that over-farming the land could have detrimental results. We realized that the soil of the Great Plains was once held in place by the deep, deep roots of the native prairie grasses. The shallow root systems of the wheat and corn crops simply couldn’t hold the soil in place any longer. The railroads that brought settlers west with the promise of free farms also, unwittingly, brought the demise of the native prairie.

Fast forward a few decades and we find that environmentalists now understand the complexity and diversity that once categorized the great prairies. What our ancestors thought of as simple grasslands, were actually important ecosystems that housed a huge variety of animal, bird and insect life. Replacing the native prairie grasses with a single crop, like wheat, meant the decline of the food and shelter these species needed. Many went extinct. Others observed a huge dip in their populations.

The solution, these environmentalists determined, was to restore as much land as possible back to its original prairie habitat, with the hope of bolstering the number of native birds, insects, and animals. But this was no easy task. The original grasslands were very diverse, with hundreds of different plants growing together. The challenge became where to find native prairie plants from which to propagate new, restored prairies.

Enter the railroad, this time as the hero and not the villain. 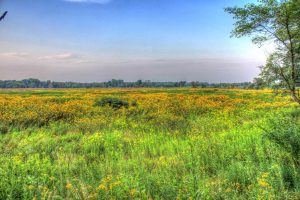 While most of the prairie had been tilled under to make way for massive farming operations, the land along railroad easements remained untouched by the plow. Long, narrow strips of native prairie grasses could be found, growing and thriving, along railroad tracks. In fact, the proliferation of grasses in these prairie remnants was so robust that scientists were able to collect seeds for replanting.

One important thing that prairies need to maintain their health is fire. When native prairies covered the plains states, fires ignited by lightening routinely swept through, clearing out the dead under-grasses, fertilizing the soil, and sparking the release of seeds. Once the grasslands were settled by farmers, fire was viewed as a destructive force and, therefore, repressed. But the trains occasionally tossed out an ember or spark from its railcars, scorching the land along its tracks. Far from being destructive, these fires helped the native grass plants to grow more vigorously.

Today, there are hundreds of acres of restored prairie habitat in the United States, a far cry from the millions that once blanketed the country, but it is a step in the right direction. Most restored prairies comprise only a few acres and only contain about half of the plant species that one would find in native prairie grassland. Efforts are being made to expand prairie remnants, too, by extending out from railroad tracks.

It is ironic to learn that the railroad system that criss-crossed the Great Plains brought about the decline of prairie habitats, yet it is the same railroads that helped save the grasslands by providing a diversity of native seeds for prairie restorations.