First off, I’d like to apologise for there being no updates here on the blog lately. When you hear why, you’ll understand. Let me tell you the story of Garfield, lovingly called Turkey for his initial round shape.

5 years ago I was entering a phase in my life where I wanted a companion. I just started graduate school, and I had decided that a fat, lazy house cat was just the thing to soothe my nerves as I worked long hours.

Our librarian, Carolyn, had rescued such a cat from the elements. A friend of hers found him living a hard life outside, torn, ragged, and beaten up. Together they showed him love and compassion to help clean him up. When I asked for a house cat, Garfield is what came to her mind.

The first time I laid eyes on Garfield, he was curled up in a cat bed next to Carolyn’s computer monitor. He immediately swivelled his head around to look at me with large, gentle eyes. I was instantly smitten. My roommate, Fred, and I took home two cats that day; Garfield and Ozzy.

Ozzy was terrified of everything, and he immediately took to hiding in a space between my dresser and a wall. Garfield took to staying near to comfort the terrified cat. It was about a week before they really started to come out of hiding when either of us was around.

Within a month, the cats had move into the rest of the house, and took over everything as if it was theirs. At first, Garfield was the Alpha Cat, but he really didn’t care. His time was consumed with lounging and getting pet.

Three years went by too quickly. In the last summer I was at my first apartment with Garfield, I went to Turkey for archaeology field school. My roommate, Fred, took care of both the cats, so it wasn’t supposed to be so bad. However, while I was gone Garfield developed full blown hyperthryoidism, and I didn’t even really know it. Sure, I saw that he lost a lot of weight, and his eyes were dilated all the time, but I hadn’t ever had a cat live into old age and didn’t know the signs.

I didn’t realise anything was wrong until he had diarrhoea all the time. By then, I was devastated. My trip to Turkey had washed out my bank account, and I felt helpless. I knew it was bad, but I didn’t know what was wrong. I knew he would die without treatment, and I didn’t have any money.

My fiancÃ©e saved him. Travis insisted that we take him to the vet, which cost $308 for the diagnostics and initial medication. Not much to some, but to a new couple just starting out and moving on a student budget, it’s pretty substantial. We had to cut a lot of corners and go hungry for a while, but I had answers, and I had hope. I had my loving cat back.

While Travis and I moved to Indianapolis, Indiana, Garfield was frantic. He had no idea what was going on, but his human was potentially leaving him. He showed his worry by pacing around, rarely leaving my side when I was home, stealing my chair on a regular basis, and demanding attention with this sweet, sweet face. (Very similar to the previous picture of Garfield after I went to Turkey or this one:)

During the move, Garfield became very jealous of Travis. He thought that I’d leave him behind and choose Travis. Verily, we couldn’t leave the fluff-ball (or as we like to say, flurf-ball), behind. You knew that though. We brought him to our new home where Travis and Garfield started to finally bond. 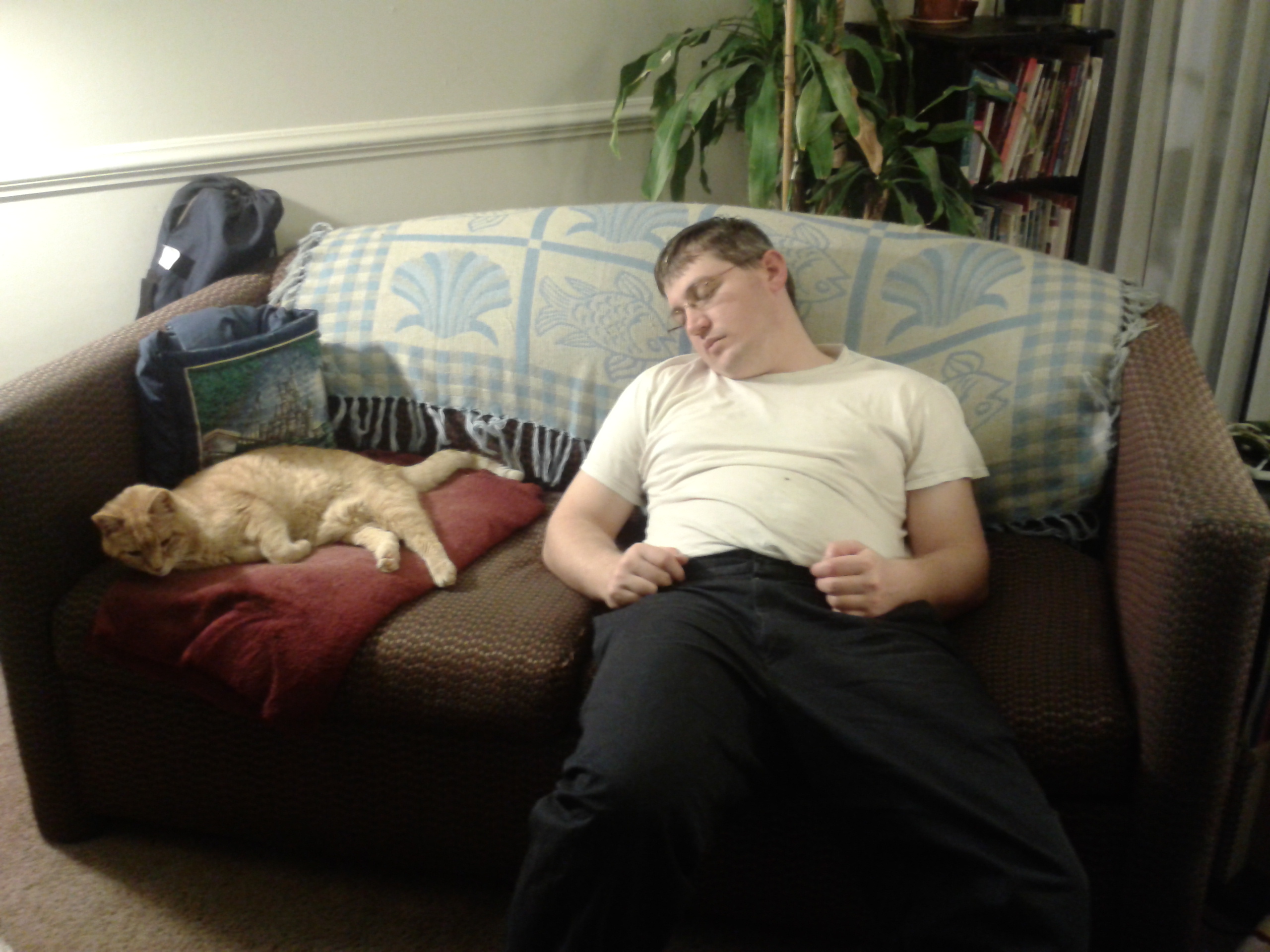 While we only had Garfield with us for a little under a year, we made the most of his time. We created lots of places he could comfortably rest his old bones.

We created a garden paradise (though it wasn’t completed by the time of his death, nor even this writing) for him.

Garfield would often enjoy going outside. OK, well, he demanded to go outside. He would go outside if there was rain or sun. The only thing that stopped that cat was snow. And every day he looked to hunt down the rodents that dared go through his yard.

In December, 2012, we realised something was seriously wrong with Garfield. He was unable to defecate or it would be too much. We thought it was due to the hyperthyroidism, but it was his body getting older and failing slowly. We took him to the vet, got him rechecked, altered his medication appropriately, and then took care of him and loved him even more often than we already were.

Travis and I stayed at home most evenings, watched a show, and sat on the couch with the cat between us. We both loved on him and let him know that everything was just fine, and we were going to be there to the end. He loved us back, and you could tell in the way he would purr loudest when both of us were petting him. 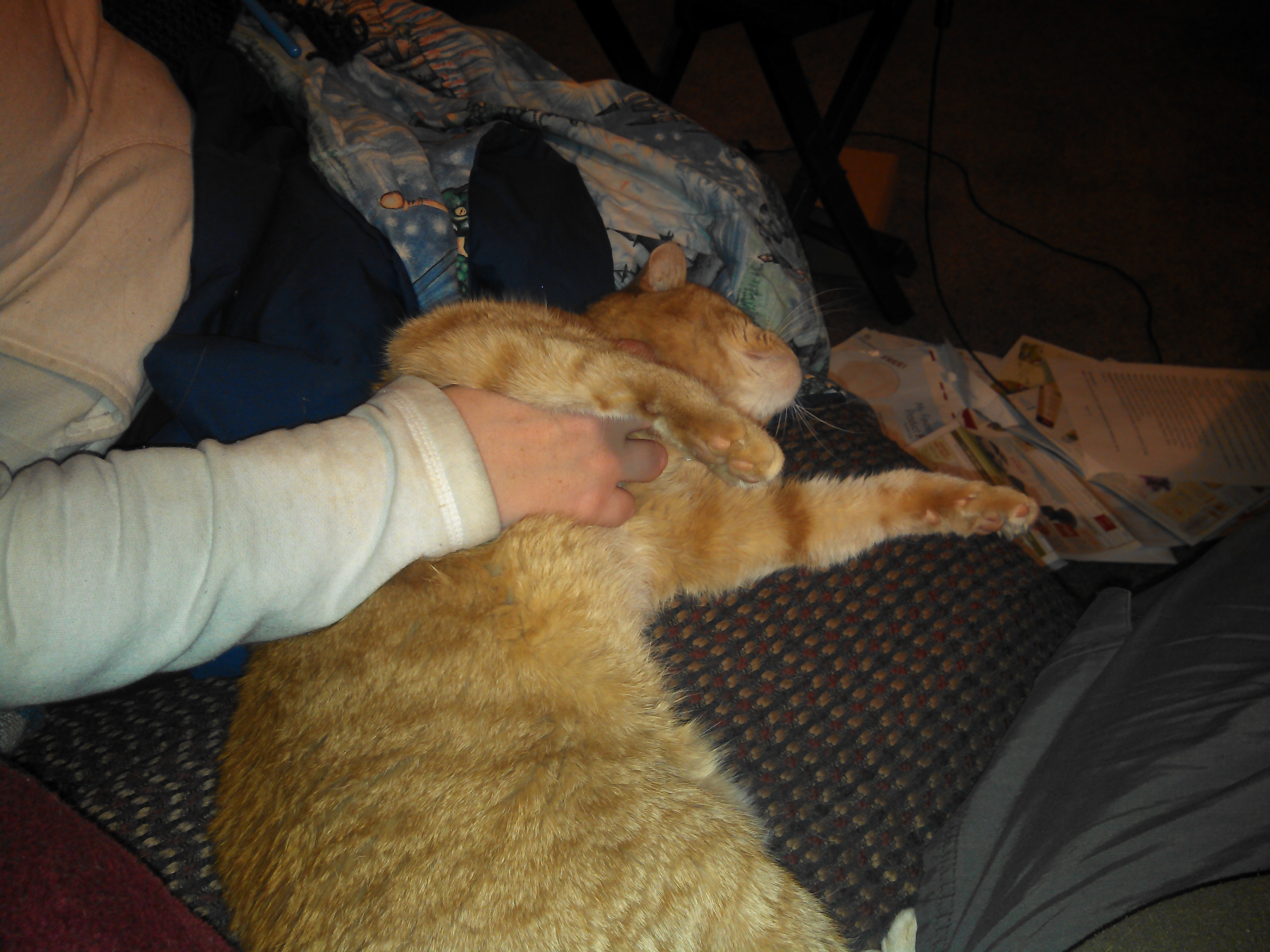 Although Garfield didn’t get seriously sick until the end of April, the end came way too soon. We took him to Grandma’s with us in hopes that a trip to the orchard would be good for him. He enjoyed the car ride down, purring the entire way. 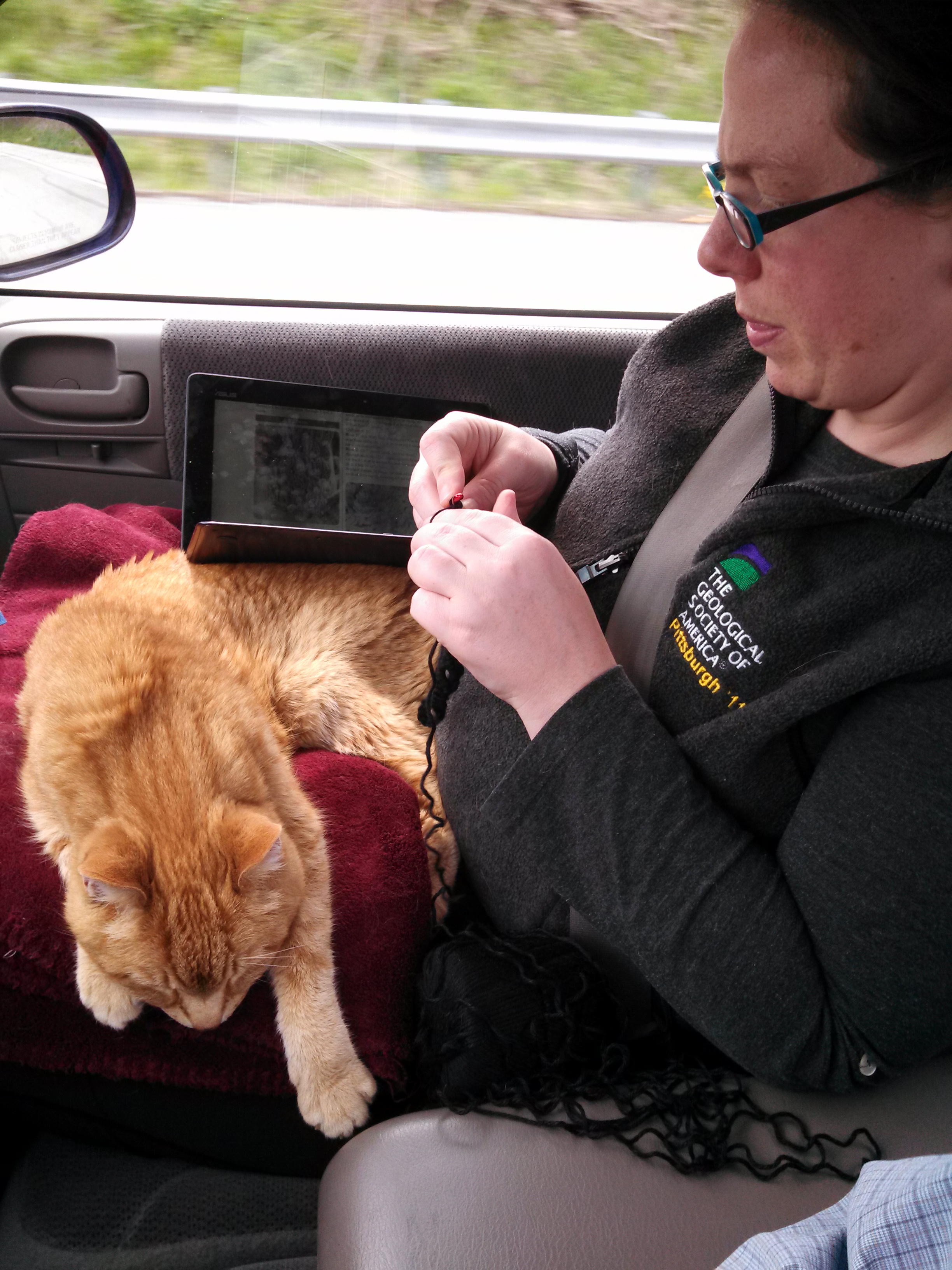 Unfortunately, some time during this trip, his kidneys shut down. — You’ll forgive me if I gloss over this. While it’s important to the story, this is not the part I want burned into my mind. — We were only at the orchard for a night, and we had to leave the next morning. We rushed an hour and a half back to Indianapolis to get him into the vet. During this time, I saw a cat cry for the first time in my life. There were actual tears coming out of his eyes. My heart broke, and I held him close to me for the hour and a half, despite the fact that he was covered in faeces and urine from his ordeal.

Travis and I got to the vet, got him taken care of, and brought him home cleaned up. We didn’t know it then, but we only had a month left with him. We spent every waking moment we were not at work with the cat. I was fortunate as I work from home most of the time, and I could be with him often throughout the day.

The last week was the hardest week of my life. I had never had a pet live into old age, and never had to be a care giver for a terminally ill person. I was not prepared for the emotional strain I would undergo. I syringe-fed him when he wouldn’t eat, carried him out to his favourite pot to get water out of, and carry him back to the bed where he slept most comfortably.

Although Travis is not blind, he works out of the house so he did not see how close the end really was until the Friday before we had to put him to sleep. It was then that he realised how bad things were. Garfield wouldn’t eat, wouldn’t drink, couldn’t walk straight, and was even beginning to find it uncomfortable to lay down. We both knew it was just a matter of days before he would die.

On Sunday, 2.June.2013, Garfield cried out in pain, and my heart broke again. I did everything I could to find out if there was a way to cheat death and give him back a life. In the end, the answer is no. We took him to the vet one final time to have him put to sleep before he could suffer any more. We figured though we weren’t ready to let go, Garfield did not deserve to suffer the pains of dying from kidney failure and toxic build up. No animal or person should.

After we buried Garfield, we began to think about how to preserve his memory. You see, Garfield wasn’t just a cat, nor just a pet to us. He was a member of our family. It was because of this loving old cat we chose the apartment we did. We wanted to create a Floridian resort for him.

I learnt a lot of lessons from Garfield, actually. I learnt how to relax a little. He would often demand that I stop working periodically throughout the day to let him out, refill his water, and most often, snuggle with him. In this way,Â  I learnt to let go of work to enjoy time with my loved ones. (And believe me, for a workaholic this is a very, very tough lesson to learn.)

Garfield adopted Travis as a second human. He communicated this one day by meowing at me until I sat down on the couch where he liked to lay with me and be pet. He then went to the bathroom to get Travis out of the shower, only to keep meowing until Travis sat down on the couch with me. Then, he jumped up between us, and purred epically loud. He was happy. By this change in jealous, wary view of Travis to one of love and acceptance, I’ve learnt to give people more of a chance. After all, I’m wary by nature. But, if this once abused and abandoned cat can get over his natural tendencies of fearing males, I can learn to not close up around people all the time.

It is these things that I wish to honour and remember about this wonderful, selfless, little cat. I had figured out that I’d do so in a living memory here at Insanitek, by building into the corporate policies for family and vacation. After all, if you’re looking at creating your own business, it’s likely that you’re a workaholic that needs to remember how to relax too. 🙂

Travis and I also have other plans as well. We are going to finish the cat fountain we started when Garfield wanted to drink outside all the time, but he wanted moving water. We’ll put up a DIY on how to make a cat fountain on a very tight budget (we’re still classified as the working poor as we make a max of $2000 a month between the two of us).

Travis also wants to make a mini kidney dialysis machine that, by the size of it, can be used on animals or humans. He would also like to invest in a 3D printer for Insanitek so we can print off kidneys.

One more thing we’d like to do in honour of Garfield is donate money to Feline Veterinary Assistance Program (don’t worry, we’ll find a good one for dogs and others eventually too). Only reason we’re doing it this way is because starting a non-profit is a bit of work. Once Insanitek gets bigger, we’ll also have a fund for our employees to draw from, as well as a way to bring their pets to work when they need to be with them throughout the day. After all, I can say that my being home to dote on Garfield significantly increased his quality of life until the very end. 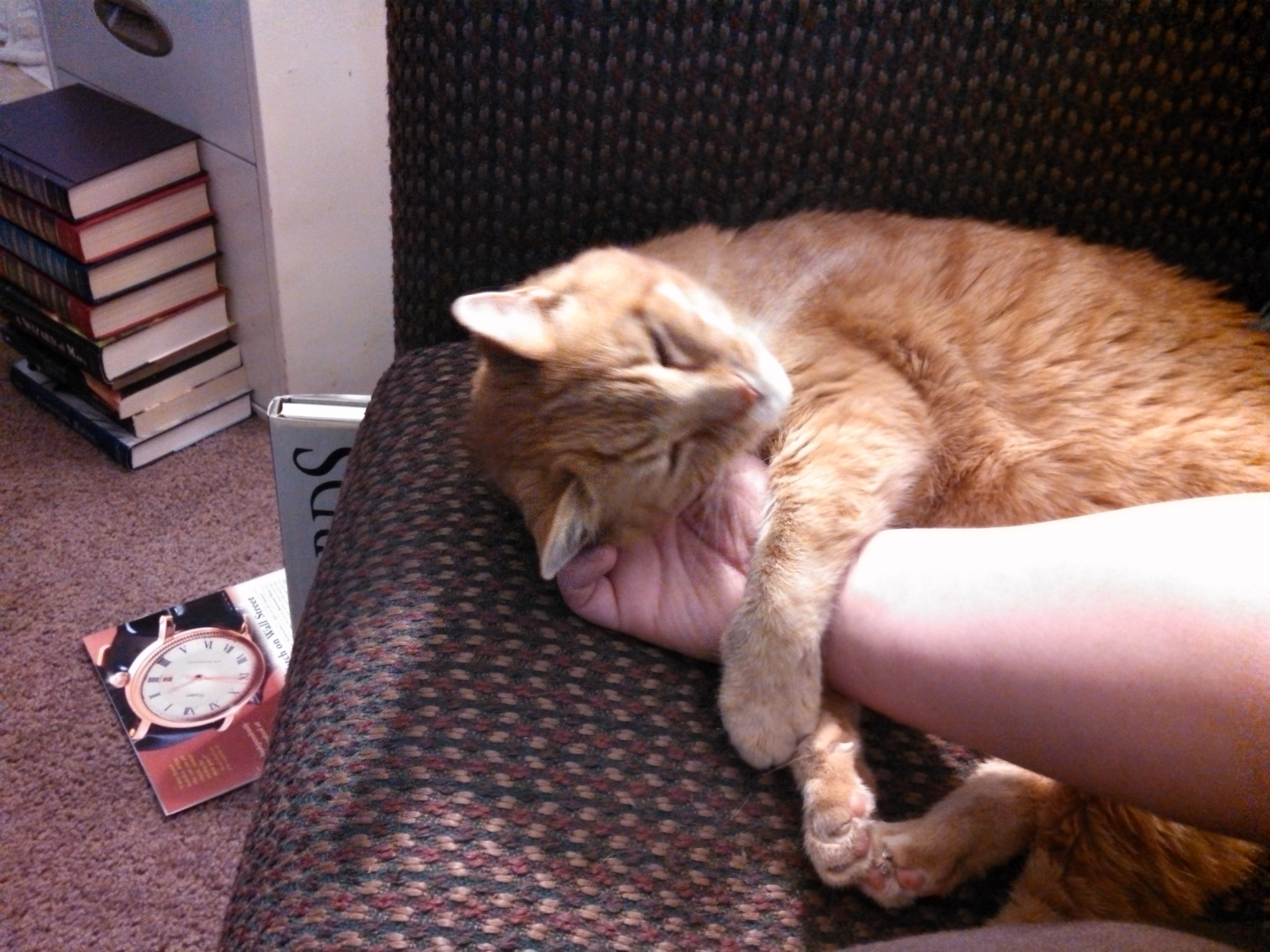 Hands-on exploration: A simple method of teaching the public

Teach bravery in the face of finances