What if someone told you that they had found a dinosaur fossil? Would it be any more interesting if it happened to be discovered an in old storage cupboard? This is exactly what just happened a few weeks ago in Brazil.

Kamila Bandeira, a student of Dr. Diogenes de Almeida Campos, has been looking into a dinosaur fossil, which was originally found 1953. Brazilian paleontologist Llewellyn Ivor Price had stumbled upon its remains, but at the time, Rio’s Museum of Ornate Sciences did not have the resources to look into the findings.  Since then, the museum has come a long way, but even about 60 years ago, the fossil was extremely relevant. 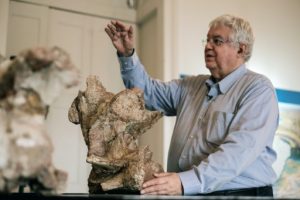 Campos, the museum’s director, says that back in 1953, “it was certain” that the remains came from a large creature. Furthermore, it needed to be studied. Money and a lack of employees held back research. Even today, Campos says there are only about 10 dinosaur experts in Brazil.

“We were waiting for the staff…for a laboratory that started from nothing to mature,” he told Phys.org. “We made a first effort with students about eight years ago and it didn’t succeed.”

Once Bandeira made the remains the subject of her doctoral thesis, the history behind the fossil started to come together. Now, it has a name — Austroposeidon magnificus. Researchers believe that it would have had a small head, long neck, large body, and lengthy tail. With this information, artists have been able to create renditions of the creature.

The entire skeleton of the dinosaur was not discovered – just a few bones, one of which was a vertebra. Campos says this is because when the creature perished, nearby carnivores likely fed on its remains.

“They also broke the long bones to get at the marrow,” Campos continued. “After, came smaller animals and nothing was left over. Anything that did remain the beetles and the spiders and the ants finished, and when there was just bones, the bacteria came. Finally the remains sank into the lagoon.”

Luckily, these few remaining fossils were still enough to tell a giant tale.