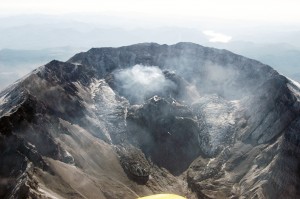 What if you had to constantly live in fear of an explosion right beneath your feet?

This is what some locals near the Yamal Peninsula of Russia are facing. Giant craters have been discovered across Siberia, and now scientists are speculating that they may have been caused by natural explosions.

Initially, the craters were revealed last summer when reindeer herders found ones as large as 260-feet-wide. Eventually, two more were discovered around the Taymyr Peninsula, and satellite images have depicted at least four additional craters in the area. Two craters have turned into lakes, and water is filling smaller ones within the region.

“We know now of seven craters in the Arctic area,” Vasily Bogoyavlensky, a scientist at the Oil and Gas Research Institute, told The Siberian Times. “Five are directly on the Yamal Peninsula, one in Yamal autonomous district, and one is on the north of the Krasnoyarsk region, near the Taimyr Peninsula.”

So what is the cause of these natural explosions?

Scientists believe they are the result of high-pressure gas released at the Earth’s surface. This occurs when permafrost melts — a direct result of the planet’s warming climate. Now, experts are attempting to warn locals of the potential for more explosions and crater formations in the future.

“If the warming continues, we will see more and more of this phenomenon,” Vladimir Romanovsky, a geophysicist who studies permafrost at the University of Alaska Fairbanks, told the news source.

He added that it could happen anywhere where there are enough sources of natural gas. In this case, that includes parts of Alaska and northwestern Canada.

To make matters even scarier, methane gas that escapes from the Earth has the potential to catch fire. In fact, residents who live in Antipayuta claim that they saw a bright flash of light in the distance around the time when a crater was formed. However, Romanovsky states that he does not know how the gas would’ve caught fire, given that there was no lightning or thunderstorm during this period.

While it may be easy to ignore these types of phenomena in areas of the world that are far from home, it’s worth making a mental note of the news. The planet is exploding — literally. It would appear that it’s had enough of man kind’s treatment, and it’s fighting back. As more effective ways to reduce global warming continue to emerge, you might want to incorporate these tactics into your daily life — at least out of respect for the planet.

Erupting gas? Not so fast. Earth Sky has done some more digging on the background of the mysterious craters, and a group of researchers now believe that they may be the result of pingos. Pingos are plugs of ice that form near the surface over time. When they melt quickly, they can cause the Earth to plunge inward, creating a crater. However, other researchers have theories that range widely. One believes that rocks could have been thrusted into the air after the release of methane gas. When the rocks hit the Earth, they created craters. To say the least, it seems like this phenomena has an abundance of mystery behind it.