A new report published in PeerJ shows that leopards, one of the most iconic big cats, has lost approximately 75 percent of its historic range. This conclusion was drawn by the National Geographic Society’s Big Cats initiative, the Zoological Society of London, Panthera, and the International Union for the Conservation of Nature Cat Specialist Group. 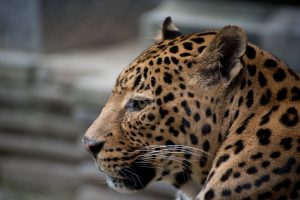 The researchers looked at 1,300 sources over the course of three years to determine the leopard’s historic and current range. As it turns out, leopards used to occupy 13.5 million square miles, primarily throughout Africa, Asia, and the Middle East. Now, they are restricted to 3.3 million square miles.

“We delineate historic and current range of the leopard and find them extant in only 25 percent of historic range, far less than the average terrestrial carnivore,” the authors concluded in their report. “Additionally, a range-wide estimate obscures important differences in range contraction between subspecies and regions. Thus, while the leopard can persist in certain human-dominated landscapes provided there is cover and prey, favorable governmental policy, and a certain degree of tolerance, the leopard is in decline, and many subspecies and regional populations are highly threatened.”

Unlike other species, leopards are fairly capable of surviving the impact of human-induced habitat change, as long as they have access to wild prey. However, much of their habitats are now being converted into farmland, where typical prey does not dwell. Additionally, there has been a growing demand for leopard skins and parts on the black market.

But what other species have become endangered as of late? Here is a small list of some of the many animals that are being threatened.

New animals are being added to the endangered species list each year, it’s worth noting that there is a wide variety of reasons for their decline. Many are man-made, leaving us to ask – will we ever consider the others who share our planet?