Dinosaurs were undoubtedly some of the most stunning creatures to walk the planet, and recently, the fossils of a new one was discovered by Ohio University researchers. The Sarmientosaurus musacchioi belongs to the titanosaur group of dinosaurs, known as the largest creatures to ever exist on Earth.

Interestingly enough, they were incredibly common in their day. The Sarmientosaurus had an extremely long neck that could move around like the “wand of a vacuum cleaner,” according to Study Author Lawrence Witmer. Then, the head would then eat up all of the low-lying vegetation. The Sarmientosaurus likely resided in South America (specifically in the Argentina area). 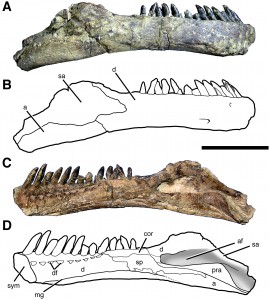 is the first titanosaurian sauropod from southern South America for which an articulated, virtually complete adult skull has been discovered,” the authors concluded in their report. “Phylogenetic analyses demonstrate that the new taxon is an archaic member of the titanosaurian subclade Lithostrotia, occupying a position more derived than Malawisaurus but more basal than taxa frequently regarded as nemegtosaurids and saltasaurid titanosaurs such as Alamosaurus, Neuquensaurus, and Saltasaurus.”

But perhaps the most interesting part of this newly discovered fossil is it showed the dinosaur had a unique inner ear structure. It was able to pick up low frequencies, meaning it could have potentially used low, rumbling calls to communicate with its fellow dinosaurs. This may have been incredibly helpful to the Sarmientosaurus, which unfortunately had a relatively small brain, in contrast to the full size of its body.

The dinosaur itself was 50 feet long and weighed approximately 12 tons. Its brain was the size of a lime, according to the researchers.

Finally, the fossil played a critical role in helping the scientists learn how this species of dinosaur evolved from more primitive ones (like the sauropods). Now, researchers believe that the titanosaurs may have retained some of the looks and sensory systems of their ancestors.

“The cranial endocast of Sarmientosaurus preserves some of the most complete information obtained to date regarding the brain and sensory systems of sauropods,” wrote the authors of the report.