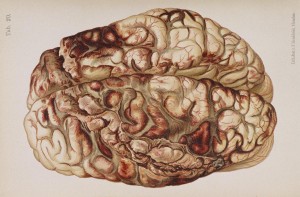 Your brain is unique in the sense that it has an original shape – one that differs from the brains found in other people. Now, researchers are learning more about how the brain’s shape may play a role in personalities.

Researcher Luca Passamonti recently led a team of scientists to determine how structural differences in the brain lead to varying personalities. They looked into how everything from brain thickness to folds form over time, as well as how they translate into personality differences.

The group analyzed more than 500 healthy people between the ages of 22 and 36. They looked at scans of their brains, which were provided by the Human Connectome Project, funded by the National Institutes of Health.

As a starting point, they evaluated the personality traits of their subjects using a questionnaire called the NEO five factor inventory. The results allowed them to divide the participants according to the “big five” personality traits, as defined by the questionnaire: neuroticism, extraversion, openness, agreeableness and conscientiousness. Afterward, the scientists could effectively analyze the scans.

One conclusion Passamonti and his team was able to draw is that neuroticism – a personality trait that is occasionally linked to mental illnesses – can be linked to a thicker cortex, based on these individual scans.

Interestingly enough, openness – a trait that reflects curiosity and creativity – was associated with a thinner cortex, as well as folding in the brain. Agreeableness was linked with a thinner prefrontal cortex (the section involved with processing empathy).

“The relation between differences in brain structure and personality in healthy people suggests that brain changes may be even more pronounced in people with mental illnesses,” Passamonti concluded. “Linking the brain structure to basic personality traits is a crucial step to improving our understanding of mental disorders. In the future, it may even give us the opportunity to detect those who are at high risk of developing mental illnesses early, which has obvious implications for prompt intervention.”

It’s worth noting that although this is the first time the “big five” traits were linked to the brain’s physical structure, previous research has looked at the brain structures of teens and behavioral issues. Scientists were able to conclude that antisocial teens with behavioral problems had different brain structures than their counterparts.

What else could brain scans help us unlock in terms of mental illness?

Passamonti, Luca. “What your brain structure says about your personality.” The Conversation. Published Jan. 25, 2017.

How is the Brain Impacted by Outer Space?