Science communication circles are growing ever more popular and passionate about science. Google “science is for…” and you’ll see that it fills in “everyone.” No doubt it’s because of the associated TEDTalk, but it’s an infectious, exciting thought amongst passionate science geeks. After all, everyone loves to share their passion and find equally passionate people. 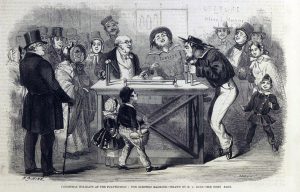 But it goes beyond this innocent shared geeking out over shared loves. Science has changed over the years. It used to be that science was easily accessible to anyone that would listen. Think Victorian Age when people would entertain their guests with science shows, then you had the street performers that were showing off their new-fangled gadgets using the latest from the world of science. Anyone who took a mind to it could take from these shows, head to their garages, and begin tinkering around.

It used to be that scientists, engineers, and creators directly to benefactors and the public.

Now, there are paywalls. Now there are barriers of entry in the form of safety procedures, licensing, and delicate machinery. And shows that crossed entertainment with communication? Now, any researcher could do the show, but the culture of “publish or perish” prevents them from doing most outreach, while the science conventions aren’t the type of thing that the non-scientist/engineer prefers to go to. They are too costly for the type of entertainment for most. The entertainment comes down to science communication.

And that’s where we need to focus for a moment: Communication.

Communication is part of the scientific process. It doesn’t matter if you’re an engineer, mathematician, physicist, or any other brand of science. Communicating your findings is part of the process and it’s expected.

Most scientists stop with writing a paper to publish.

With the demands of today’s society, this is not good enough. There is a lot research on every variety out there. Despite of this, many things get over looked by other scientists and other researchers (hey, we can’t read everything). And, the general public knows just enough to be dangerous, but not enough to be well-informed enough to make amazing decisions (think politics).

We need to do better in the world of science communication. Odd thing is, science communicators on Twitter talk about this all the time (“I Am SciComm on Twitter,” 2017). Amidst all this chatter, there was one clear argument from Furaha Asani, a PhD candidate studying (“Research projects,” n.d.) the detection of subtle immune defects of Streptococcus pneumoniae. Asani wrote a piece in Medium (Asani, 2016) noting that in the days of easy information exchange, it’s just as easy to spread speculo-science and people reading it might not put it through the rigours it so rightly deserves.

This is just one aspect of the science communication problem.

Now, don’t get me wrong. I love reading science articles, especially things that are new to me, so I get the general excitement of being able to share something cool ─ even if I don’t quite get it. (Or, um, get it at all.) But the problems in scicomm goes beyond the public reading the information and sharing it. It’s also that science communicators tend to get stuck in a neat little cycle with the scientists (Ke, Ahn, & Sugimoto, 2017). This is great for us, but not so much for getting the science out there in the world. At least not if we want to keep standards and accuracy high.

I’m calling on all scientists and science communicators to stop dropping the ball on this. We need to work together to help increase science literacy across the spectrum.

Let’s get the focus on science literacy 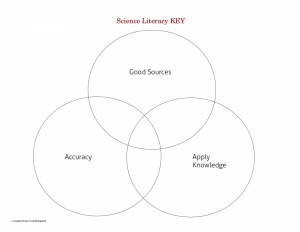 Middle school teaches people who to have science literacy, you need to have good sources, accuracy of understanding, and be able to apply knowledge. Not many people have a grasp these three things. Very few know how to identify good sources, and the often get blinded by bias (of any variety). Then, they have to understand the source with accuracy, including the methods, conclusions, and even the biases behind the researchers. They need to understand the downfall of the arguments as well as the good points it makes. Finally, they need to understand how all of it applies.

The most useful of these three points is knowing what makes a good source, followed very closely by accuracy. Generally we mere mortals can’t remember things that we don’t practice on a normal basis. This means we need to be constantly reminded what makes a good source and accuracy in research ─ even those of us that should know better. For example, I recently had to remind our writer, Kristen Ciccolini that one of her sources, a single biased source does an interesting experiment on the nutrition of chicken eggs, it’s not viable research and no claims could be made off it. It might raise a few eyebrows, get a few ideas flowing, but there were six major problems with the piece:

This is a great experiment, but it is not research. It’s definitely not a good source, let alone accurate in any way. No conclusions can be made off this with any confidence.

What it can do is create questions. It can encourage other people to have their experiments and put their data out there to compare with others. It can create science literacy by driving others to look at the experiment and explore on their own.

So get out there an experiment. Challenge the science with questions, look at methods, and compare your data. Science really is for everyone.

Defeating Ignorance, One Adult At A Time